Support in Parliament for the Brexiteers’ call to “crash out of the EU and trade on WTO rules” seems to be ebbing away. But this just reflects fears about short term inconveniences (such as stockpiling medicines) rather than a proper appreciation of the huge, and continuing, risks to the UK’s foreign trade. Commentators have failed to test the full implications of the Leavers’ proposals against the complex reality that would face the UK. 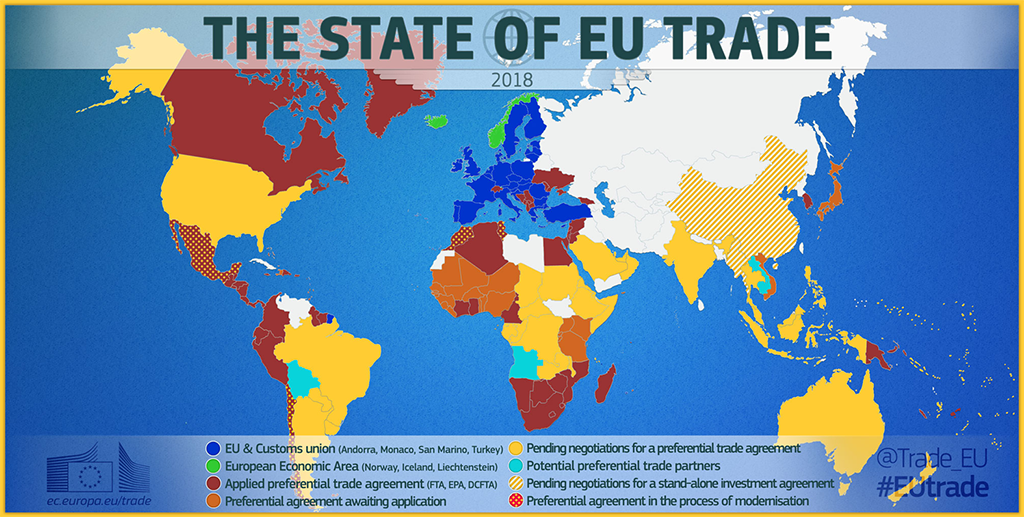 Overall, it is swiftly becoming apparent that the Leavers’ claims that favourable free trade deals would be concluded rapidly are being shown up to be – at the least – an illusion. But British business must recognise that these problems will surely surface eventually in our non-EU trade even if an “ambitious” deal is done with the EU.

There are at least four components that should concern Parliament greatly:

When members have a dispute about “the rules” in a particular case, the WTO has a two-stage resolution process. First, the Dispute Settlement Body (DSB) sets up a “panel” to review the facts and issue a ruling. If the disputants accept that ruling, the case is over. But one side may not accept it and decide to appeal to the Appellate Body. This consists of seven judges who serve four-year terms. It requires a minimum of three judges and judges may recuse themselves if they face a conflict of interest such as their own Government being involved.

Since 2017, President Trump – pursuing his transaction rather than value-based approach to trade policy, but also making some arguable points – has refused to agree to any new judges so only three are now left. The terms of two of the judges expire in December 2019 and the final one in November 2020. The number of appeals is stacking up – partly driven by complaints about President Trump’s trade wars so he is unlikely to relent and then see himself castigated repeatedly. One of the remaining judges is American who may have to recuse himself from some cases involving the US.

If the UK “crashes out” next March, then might not have any WTO protection against cases involving the US, India or China – the nationalities of the remaining judges. In 2020, all protection will cease – unless we are willing to bind ourselves to accept the initial panel ruling. This entire process hardly constitutes “taking back control” from foreign judges.

The second risk to the UK’s foreign trade stems from the way in which “tariff rate quotas[1]” are agreed. The UK – as with all EU members – is a WTO member in its own right so when it leaves the EU, it will have to agree a schedule of its own TRQs with all 164 WTO members. Problems can arise if a third country has used the UK as its trading `beach-head’ into the overall EU market. The EU and UK have proposed[2] to split the existing TRQs among themselves on the basis of a “representative three year period” trading patterns (assuming such data both exists, and is accepted by all parties as robust!).

To illustrate with an extreme example: supposing all Country X’s beef imports to the EU arrive in the UK for processing and then all of it is onward-distributed around the EU. On entering the UK, it would be counted against the UK TRQ. Entering the EU, the same meat would use up the EU’s TRQ – if available. Currently - with the UK inside the EU - the TRQ would be used only once. The UK trading partners rightly complain that a simple split of the TRQ is not good enough. The UK would have to open up more to compensate for the loss of privileged access to the EU market.

The opening shot[3] in the post-Brexit trade war was fired in September 2017 by a group of countries -headed by the US – that stated bluntly “we cannot accept such an agreement” Subsequently, comments on the EU process were lodged[4] by the governments of Australia, Canada and New Zealand as well as key members of the Mercosur trade bloc: Argentina, Brazil, Paraguay and Uruguay. The UK has now started the process by filing a 715-page schedule of the affected goods. It seems likely that the vast majority will not be contentious but the contentious parts will leave sizeable parts of our foreign trade at the long-drawn out mercy of foreign judges (if they still exist).

A fourth area of risk is public procurement. The Institute for Government has published a report[5]  that explains the scale of the market (14% of GDP in the UK, for example). It also analyses the debate about whether the UK would have to make a separate application to join this WTO sub-group afresh after leaving the EU.

The WTO system operates on the basis of consensus so every state can fight for its own trade interests. Moreover, broader foreign policy interests could also come into play in allegedly innocuous trade disputes. Anglo/Russian relations could provide one such source and media reports suggest that Russia has already lodged a formal objection – thus blocking the required consensus.

[1] A “tariff rate quota” is an arrangement whereby an agreed quota of goods is allowed entry with a special tariff – usually zero. Any imports above the quota attract a penal tariff.