Convenience isn’t a word I’d normally associate with Brexit – pain, anguish and chaos are more the words that spring to mind. So it was nice last Sunday to have a sea of blue and yellow paint – the colours of both the European Union and, coincidentally, also the colours of the St Albans emblem ̶ all over a local community hall for our banner-making session , in preparation for the Put it to the People March in London on Saturday 23rd March. The colours go together nicely, which is fitting for a city that voted 63% remain. 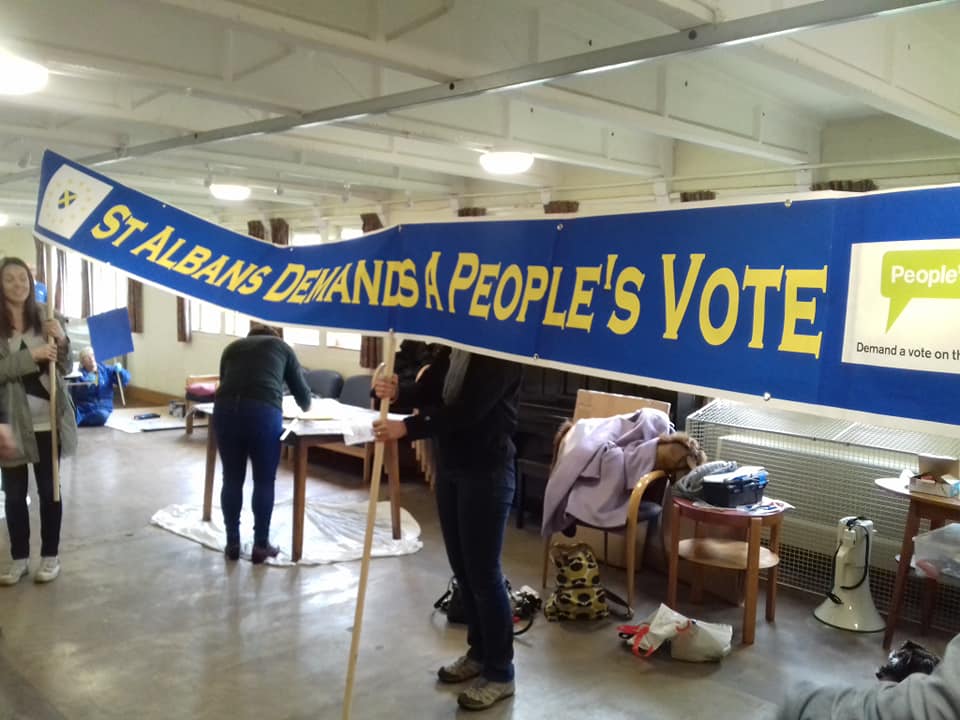 One person had done all the materials buying, several people had pooled tools, and one person opened up use of their shed to the preparation. Three of our most-competent DIY-ers had spent the Friday evening cutting, sawing and pre-prepping boards of different sizes and fixed them to poles of different lengths, anticipating the varying ages of people we know are marching ̶ hell hath no fury like a well-versed and determined 10-year old threatened with having his European Citizenship torn away! 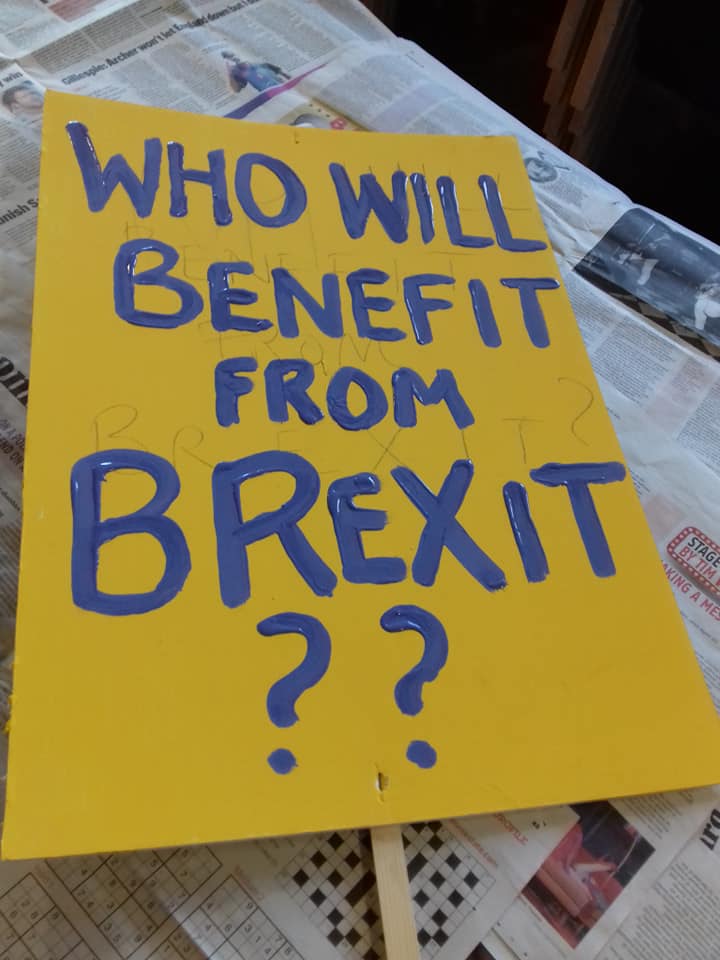 After protecting the hall with newspaper, we got busy. Having pre-prepped boards meant ample time for thinking up pithy slogans, revealing our innermost disgust with and hatred of Brexit. Some individuals used a pencil to map out their slogans and carefully work out where they were going; others just dived in with little forethought and no actual plan. [Hmm… sounds familiar…?]

We had recycling bin-raiding going on, hunting for that perfect ‘thing’ with which to fashion a star stencil, and we even took late custody of a large placard from last time that the owner had held onto and brought back as she cannot march. Whatever the approach, the results are colourful, eye-catching, cheeky and thought-provoking – one child’s banner made me well up. 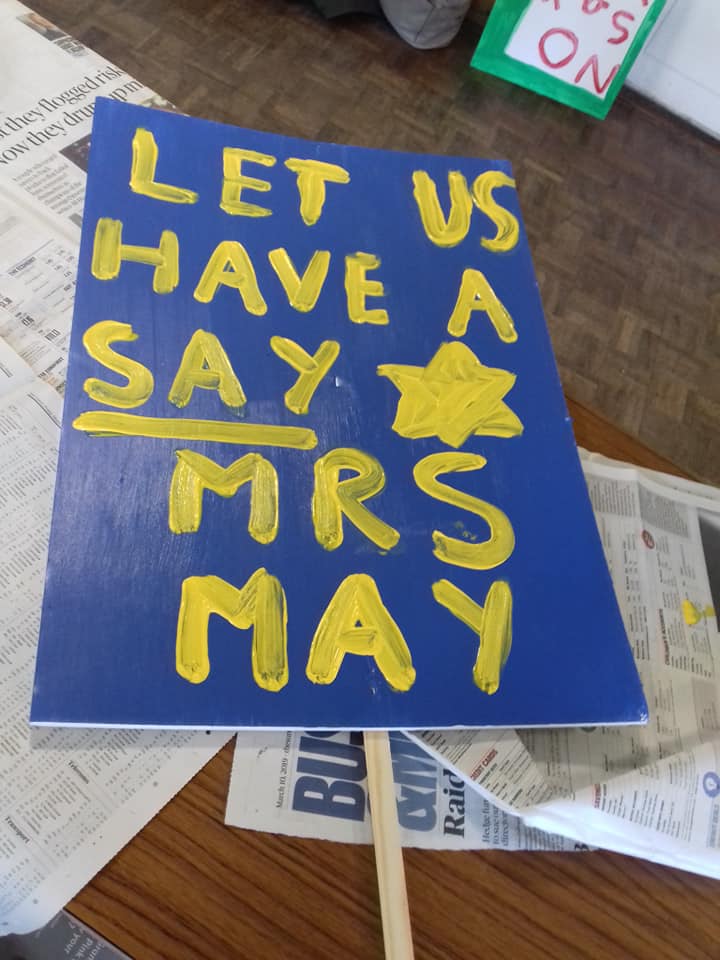 Tea, coffee, squash and biscuits plugged those gaps while the paint dried and if creative juices stalled, and we had Mitzi the Euro-Dog to entertain us. We also tried out a member’s enormous new megaphone and a special group banner that needs five poles to carry out. It was a satisfying couple of hours and we made a small profit to swell the group coffers too.

We’re serious about getting a People's Vote and we have been serious for almost three years now – see you on Saturday. Shout it loud, we want a People’s Vote and we want it now.

We’re meeting at 10am on Saturday 23rd March at St Albans City station to go on the Put it to the People march in London - Full details can be found here. We hope to see you there! 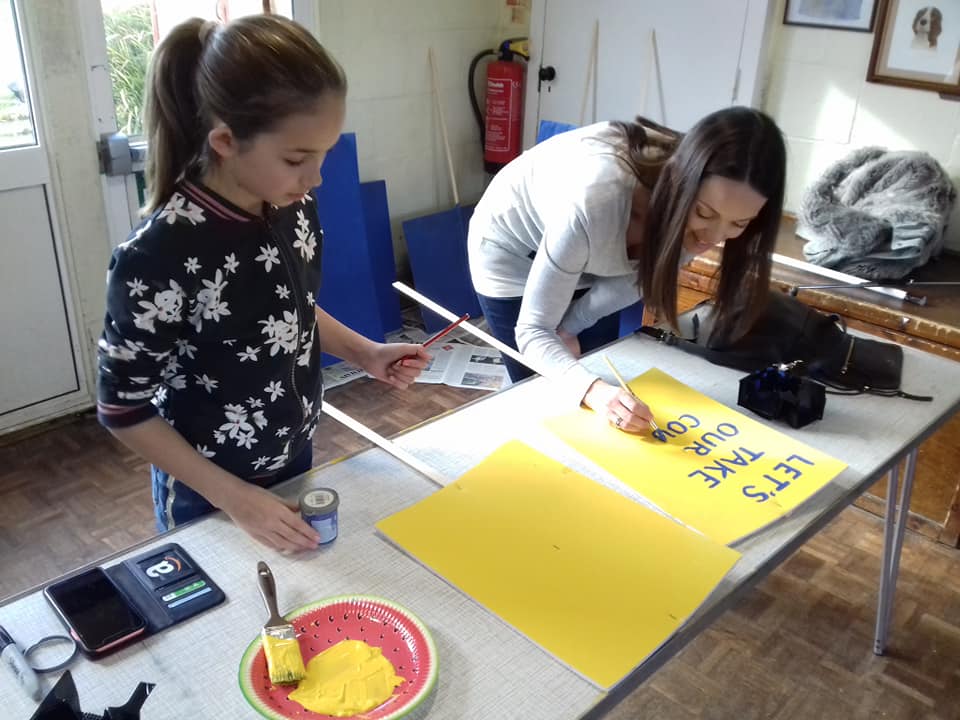