The European Movement UK is excited to invite you to "Building Bridges, Not Barriers", our 2021 online conference taking place on Saturday March 27th.

Featuring keynote speeches from leading voices in the movement, as well as panels, Q&As, networking opportunities, social events, and much more this is an event you won't want to miss.

In just two months we have already seen the disastrous outcome of this bad Brexit deal. As we face more and more challenges because of Brexit, the European Movement UK will be leading the fight to build back what we have lost, brick by brick. And we want you to be at the heart of it.

Already confirmed to appear at the event are great speakers that include:

...with many more still to be announced. 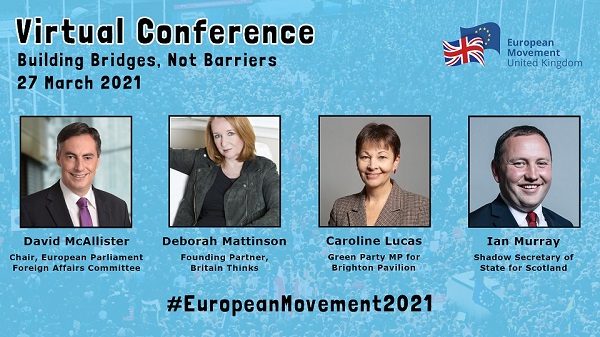 The main conference, including all keynote speeches and panel discussions, is free to attend and open to all.

In addition to the main conference, European Movement members also have exclusive access to campaign workshops on topics such as effective campaigning, social media, engaging with local press and media, outreach and community engagement, and even campaign photography.