Today, it was announced that Boris Johnson and the EU have agreed to a deal. Let me say in no uncertain terms: this new deal will have catastrophic consequences for both the economy and the union.

Just last year, Boris Johnson said that ‘no Conservative government’ could sign up to a border on the Irish sea. Yet that is exactly what his disastrous hard Brexit proposal does. Johnson’s Brexit plan risks ripping apart the very fabric of our precious union seam by seam. As a lifelong Conservative, this deal goes against everything that my party has traditionally stood for. 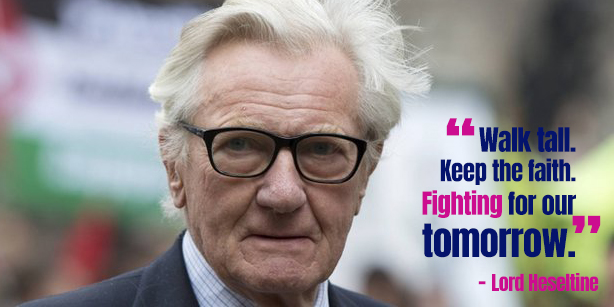 It is time to decide what kind of future we want for Britain.

It is clear that the prime minister cannot be trusted. The people, not Boris Johnson, must have the final say on Brexit.

Just seven months ago, I said these words in parliament square at what was one of the biggest protests in British history:

“Walk tall. Keep the faith. Go back to your villages, your towns and your cities. Tell them you were here. Here, In parliament square. Outside the buildings that inspire parliamentary democracy. Fighting for our tomorrow. In peace. Secure. The bitterness and bloodshed of Europe’s past buried with its history.”

Since then, European Movement activists have heeded my call. They’ve handed out an astounding 1.5 million leaflets in villages and cities across this great land. They’ve arranged 173 coaches from communities across the UK.

On Saturday, we will make history again. We will once again come together in parliament square and say with one unified voice: we demand a People’s Vote. Parliament will be sitting. History will be made. The time is now.

We must stop Boris Johnson and the hard-right cabal currently squatting in Downing Street. Will you donate to help our activists put a stop to this hard-line right-wing agenda?

Join us in demanding a People's Vote by Marching with us this Saturday:

We demand a People's Vote