As part of the People's Vote National Action Day on Saturday 8th December, SSTIE were joined by some residents of Tonbridge from other groups and most encouragingly by several new people joining us at our Brexitometer. This bustle of people became a magnet for many passers by and drew many into discussions with us.

The results of our polling speak for themselves with 78% in favour of a People’s Vote and 73% in favour of No Brexit. These results echo what SSTIE has uncovered in the past fortnight in Swanley and Sevenoaks.

It is true that some people in Tonbridge who voted Leave in 2016 just want to get on with leaving the EU, and a different group are fed up with the whole process. However, there was evidence of people changing their minds about how they had voted last time.

It was also strikingly clear that many who voted Remain and wish to see a People’s Vote sense that the tide is changing in their favour as the complete failure of the Government to deliver the promises of the Leave camp in 2016 become more and more apparent. 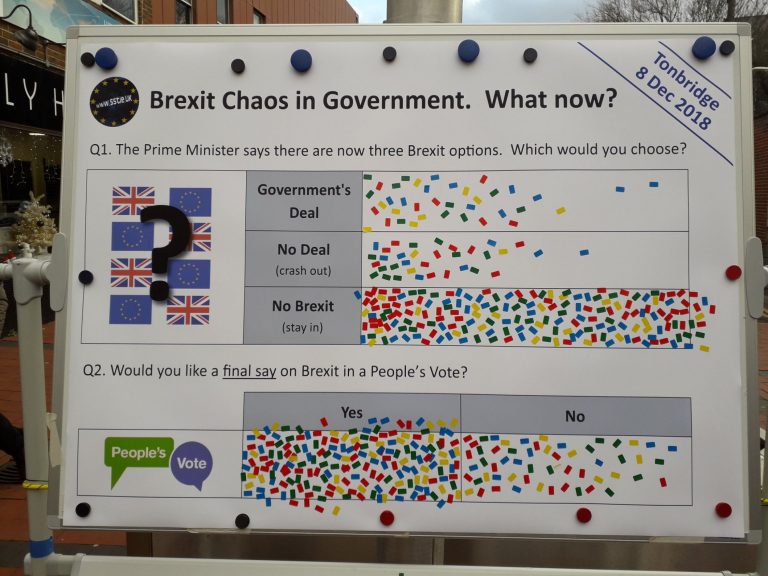 SSTIE campaigners were most heartened by the encouragement of many who said things like “Thanks for doing this for us”, "Well done, keep it up”, “Congratulations – 6 months ago I would never have believed that this would be possible but now that is distinctly possible”.

The last bit of encouragement came from the passerby who handed us a dozen large and delicious biscuits which were very welcome on a cold day."

This article has been slightly edited and can be found here