The Portsmouth-Chichester branch is spread over eight parliamentary constituencies and this time we all agreed that members and supporters would make there own way as suited or else meet up on suggested trains.

A Southern Rail service left Fareham at 8.39 and a good many of our people joined there and further down the line at Havant and Chichester. This contingent all met up on the concourse of Victoria station after the train’s arrival at 10.41. I was on this train and it was packed, standing room only after Chichester. But the atmosphere was electric. It was quite clear that as well as us lot from the branch, almost everyone else on the train was going to the same event.. You could tell that from the chatter, the badges, t-shirts, placards, flags, face paint and everything else EU.

A Southwestern service left Portsmouth and Southsea at 9.20 and many of our members and supporters from the city joined this train while more came aboard at Havant and at Petersfield They arrived at Waterloo at 10.51 and had arranged to meet up at an agreed point on the station concourse. The different routes from Victoria and Waterloo to the starting point of the march couple with the sheer volume of people meant that there was little or no chance of the two groups meeting up.
The small group from Bognor Regis, our most recently formed constituency campaign group, made their own way to Victoria. Group leader Arno, originally from the Netherlands, took them to his favourite Dutch pub for a light lunch before joining the march in Whitehall.

While the main group that had made their way up to the start point from Victoria tried to keep together, if you stopped for something, such as buying badges in support of the wonderful Steve Bray, and the rest of the group walked on then that was it. Trying to catch up was all but impossible. But it didn’t seem to matter. The myriad placards, the singing, chanting, drum beats and general good humour provided a kind of company for one's soul that could only be experienced at an event of this kind.
And it was a real pleasure to bump into Heidi Allen and have a brief chart about the state of British politics and the aspirations of The Independent Group.
A long, tiring but hugely uplifting day enjoyed by all. 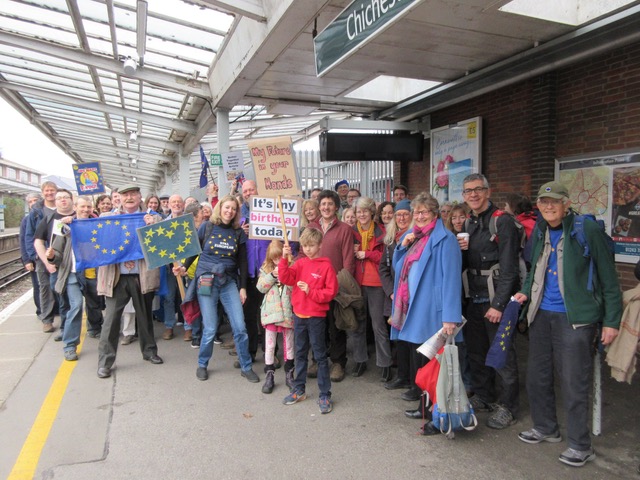 David Rowen is a member of European Movement and chair of Portsmouth and Chichester for Europe.