We were out in force on Saturday (8 July) for our nationwide Action Day, campaigning for a future side by side with our European partners and inside the EU. 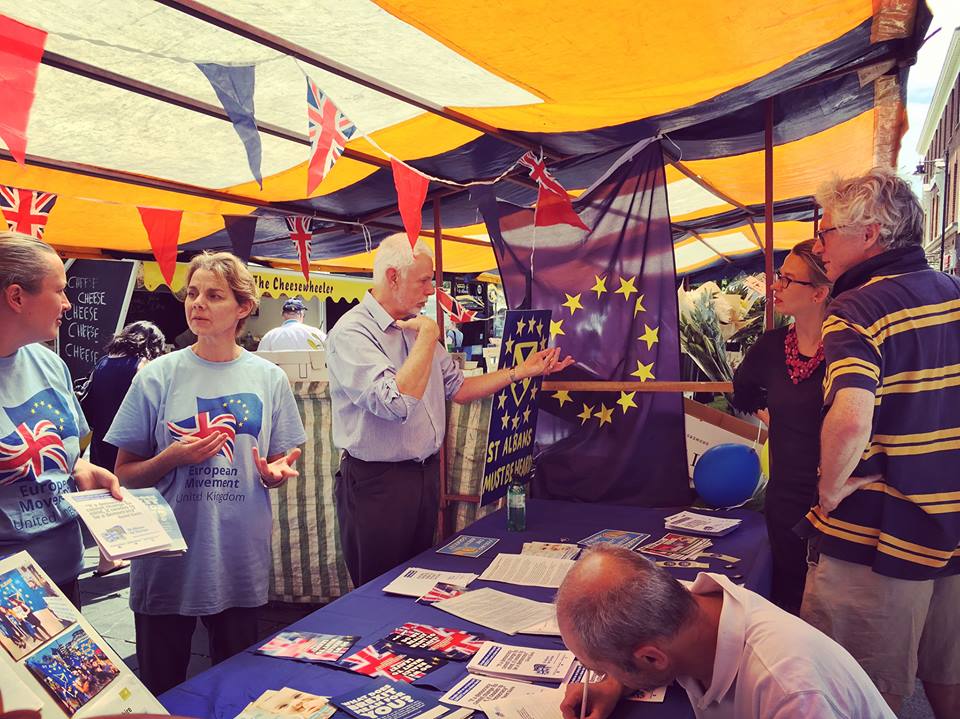 Events were run by local branches in St Albans, Brighton & Hove, York, Cumbria and London; and many more regional campaign initiatives are in the pipeline for the coming months.

We talked to the public about our opposition to leaving the EU, gave out campaign leaflets, recruited new members and made some noise on Twitter!  In many of the locations, our leaflets were cleared and members of the public were very interested in what we stood for.

St Albans for Europe, like other Action Day groups, had a stall with campaign literature - theirs was in St Albans market. Local chair, Fiona McAndrew, said: “We have been out making our voice heard, because, now more than ever, we believe that a future at the heart of Europe is in the UK’s best interests – a belief which we know is very widely shared.

“The negative impact of Brexit is already beginning to be felt across the country with 96% fewer EU nurse applicants since the referendum vote; inflation rising as real wages drop; businesses relocating abroad or under threat; and uncertainty over the rights of EU citizens living here and UK citizens living in the EU.

“We fundamentally disagree with the direction government is taking on Brexit. Following the general election, Theresa May lost whatever mandate she thought she had for a hard Brexit and we maintain that leaving the EU is a mistake.

“Now, more than ever, is the time for pro-Europeans to join the grassroots European Movement and make our voice louder!

“Together we can keep the pressure up on Parliament to challenge Brexit and require government to account for its decisions as they are made.”

James MacCleary, campaigns director for the European Movement UK, said: “We are seeing a major shift in the language being used to discuss Brexit. People are starting to talk about not leaving at all.

“The government and Prime Minister have lost any authority to claim a mandate to argue for their vision of an extreme, damaging Brexit; and the unchallenged view that leaving is the only option has been exposed as completely false.

“Our supporters and members are the backbone of our Movement and it is thanks to their positive involvement in this Action Day, that we have been able to demonstrate a popular, ground-based expression of, not just opposition to Brexit, but active support for staying in the EU – and to show that the European Movement UK is alive and kicking!”