Last Friday night was the launch party of the Four Freedoms Pale Ale, a project between Clarkshaws Brewery and a group of South London pro Europeans. Performing was an ensemble made up of local band, the Alabama Three's membership. It was a great night and over one hundred people came from across London, including Wandsworth and Merton, to enjoy the night.

Roughly a year ago, three campaigners commissioned a beer from our local craft brewery on a small run, to then share out among friends and fellow campaigners. This beer was called the Four Freedoms, a play on the now all too familiar term which describes our relationship with Europe but more importantly an amusing name for our project. The group had a lot of fun working with the brewers, Clarkshaws of Loughborough Junction and the beer was received positively by all. 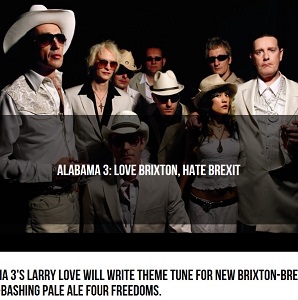 After discussing with the brewers, it was decided, that the group would be happy to see the beer have a wider commercial run. The label designer was on board and so we all got to work. We agreed to promote the beer to wider circles in Wandsworth & Merton and Lambeth and arrange a launch party. Fast forward a few months and it had all got a bit grander. A European Movement Wandsworth volunteer had arranged for the band to come play and a much bigger venue was needed. There was also a lot of support from the European Movement itself, who were pleased that we had found a fun project to work on locally.
They also decided to invite local politicians as despite our movement being cross party and unaffiliated with political parties, supportive politicians were valued who share our values and who publicly support our cause. Mary Honeyball MEP and Helen Hayes MP both attended, as well as local councillors from Lambeth. Both Mary and Helen spoke as well, both noting that the group was demonstrative of a more emotional and more positive pro European movement. 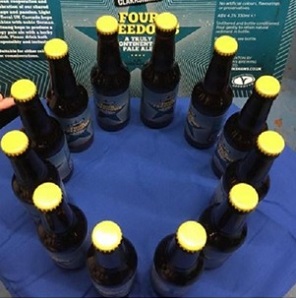 This is an important point to emphasise. Wandsworth European Movement have been working hard for nearly 3 years now to preserve our relationship with European and the European Union. They've campaigned for Remain, to stay, for membership of the Single Market, to protect our NHS. They're working to make the case for reconsidering the decision made in 2016. They're supporting the People's Vote. But it's all for nothing if we cannot make a positive case for it all and have fun doing so.
This is why projects like the Four Freedoms Pale Ale are important and Wandsworth European Movement hope we can do more fun activities like this in the future.
If you are interested in buying the beer, please contact Clarkshaws Brewery. Ten percent of the sale price will be donated to the European Movement.