There were about 20 Ely for Europe members waiting for the 9.17 train to London... and some people from our town they'd never met before - clearly all the leafleting we did had an impact! The group arranged to meet the people heading from King's Lynn on the first coach. The train was absolutely packed, and Ely for Europe passed People's Vote stickers around. Most of the people on board were going to the march. The oldest spotted must have been in his eighties. The youngest around 5, and he and his sister had made their own placards on paper plates. 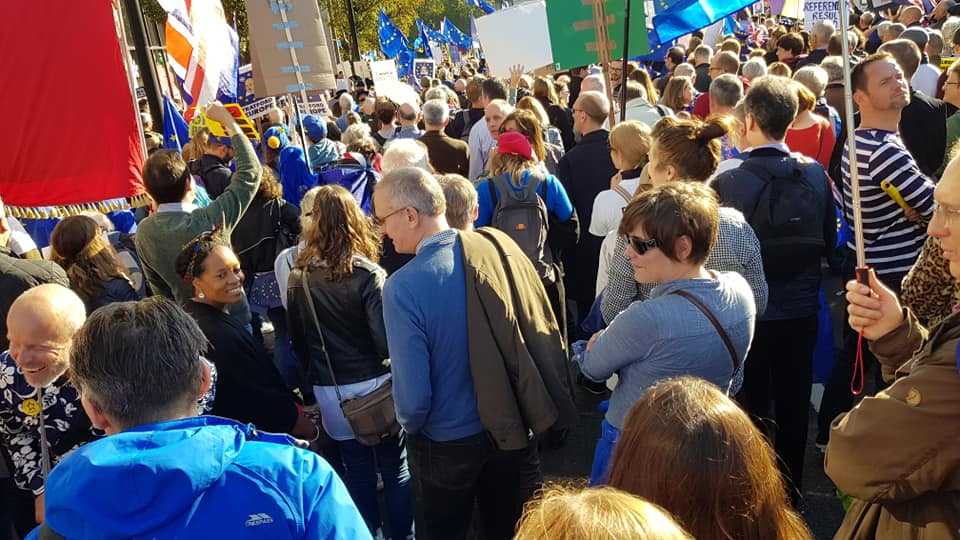 Members from Southeast Cambs were supposed to join at Waterbeach and Cambridge North, but the train was so packed that they had to wait for the next one. The train was still full, with a very high and visible number of marchers, after leaving Cambridge with an additional 4 coaches.

Ely for Europe's members have a tendency to scatter for marches! Some got on the bus from Cambridge, some got an earlier train, some got a later train, some drove. There were over 120 attendees for Ely and Southeast Cambs.

The three Cambridgeshire groups met on Park Lane and marched altogether - or rather standing still for quite some time, and chatting to the people around them. The crowd was so diverse and so welcoming. Many families were marching altogether: two, or three generations. Most of the people they talked to had come from much further than Cambridge.

There are only two known from the group who eventually made it to Parliament Square. But everyone had a really good time! In particular, nothing could beat the sense of achievement of being part of such a massive, friendly crowd... and for being part of the largest show of support for the EU that has happened in the UK to date. They're more hopeful than ever that they can contribute to changing the Brexit narrative, one step at a time.