On 20 October, around 200-250 people gathered at St Albans City Station, many dressed in the bright blue and yellow of the EU flag. Following distribution of hand-painted banners, a group photo and interviews with the local media, they were on our way to the march, taking two different trains as it was such a big group!

It was a gorgeously sunlit day – good job, as they were at a standstill for well over an hour and a half, giving everyone a chance to take in the array of thoughtful and often provocative banners hailing our cause: promoting a People's Vote to ensure that the government's Brexit deal is put before the country. 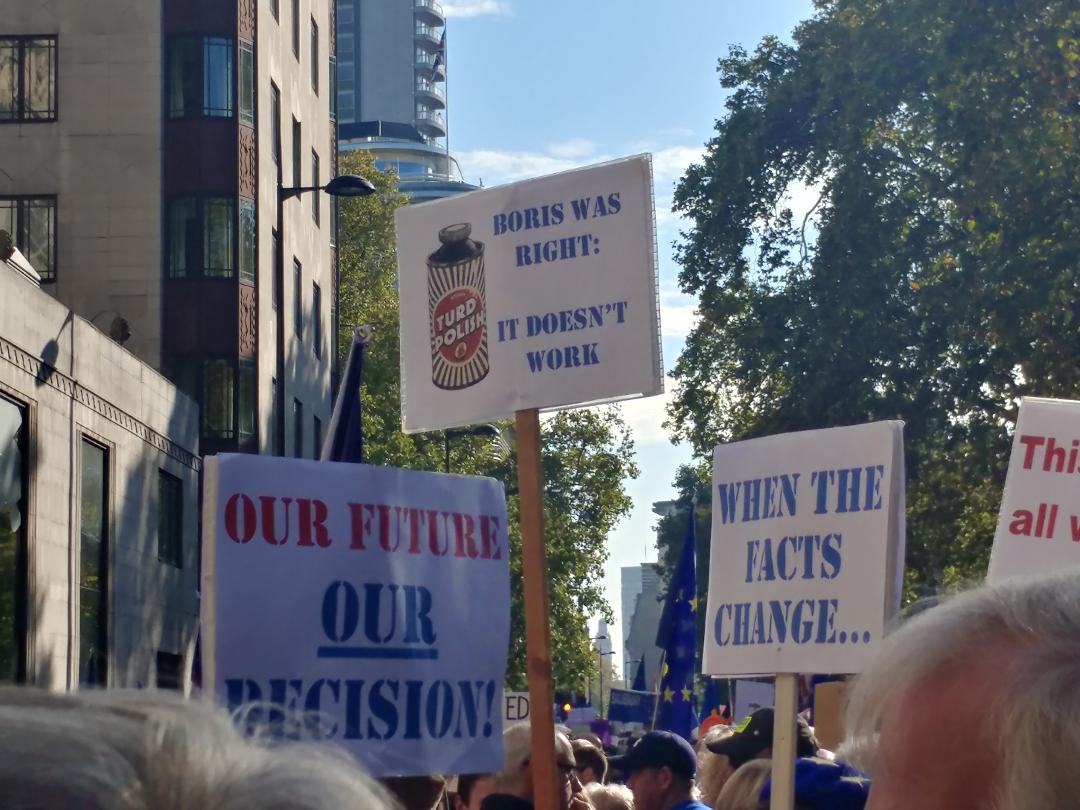 At last the group started moving, heading towards Parliament Square via Trafalgar Square and Whitehall.  Traditional and yet spontaneous cries of 'shame on you' broke out as we passed Downing Street.  The march remained peaceful yet was noticeably louder than previous demos, as they expressed our passionate opposition to the folly of leaving the EU.

“I was one of the lucky few from the St Albans group to make it to Parliament, and the square overflowed as we listened to speakers from across the political spectrum,” local marcher Anita Mannion said. “Ciaran, a delivery driver, warned of the destructive chaos that will ensue if border controls are implemented. One after another, activists spoke of their passion for the European project.  The crowd vocally wondered where Jeremy Corbyn was...  but David Lammy was there to exhort us: don't mourn; organise!  Which is precisely what we shall continue to do.”

“This felt to me like it was the time to get up off my sofa and join the people who have been doing this so actively for the past two years and really show my support… it had a sort of ‘last chance saloon’ feel about it for me and I wanted to at least be able to tell my children that I tried to do my bit to avoid what feels like impending disaster.” 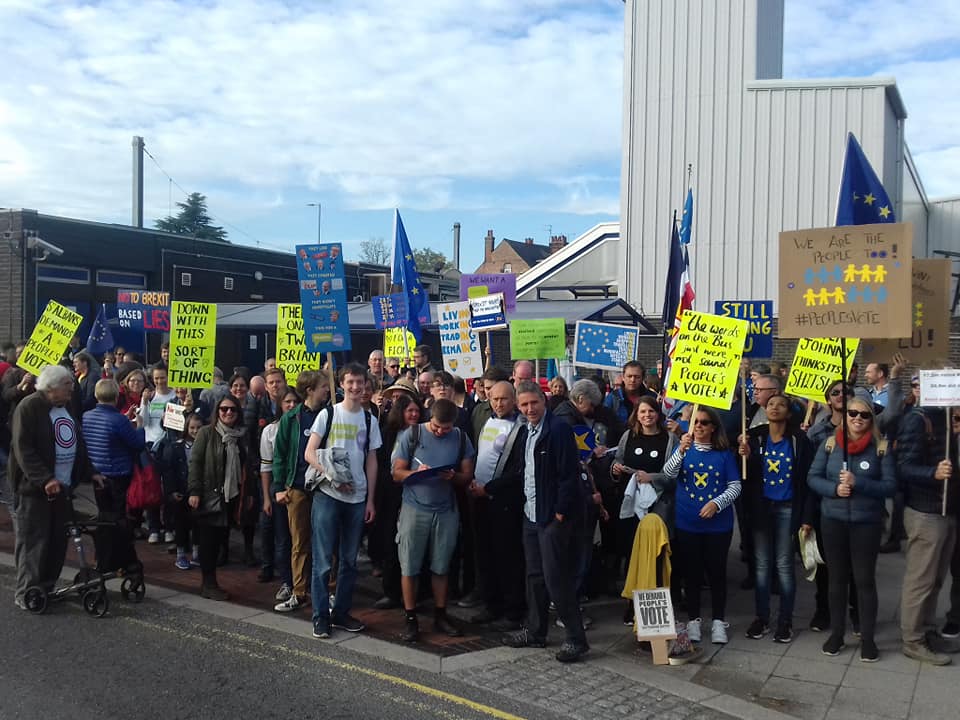 Karen said the Braveheart-style facepaint she and her daughter wore attracted a few looks on the way to the march. “Stopping off for a coffee, the waiter took one of our EU flags and wished us luck, another elderly guy who was a retired surgeon also stopped us for a chat and to pass on support.

“We waited for two hours before we finally moved! That said, the time passed so quickly, reading all the banners, chatting to people, listening to passing music  ̶  “Together in Electric Dreams” sticks out for me  ̶  listening to a man singing “The Spam” song (on the basis that that is all we will have to eat post-Brexit), watching a band of four people play brass instruments coming dancing through.”

One woman on the march told those around her about her daughter who runs a business exporting to the EU, processing 30 EU orders a week and two or three to Switzerland. 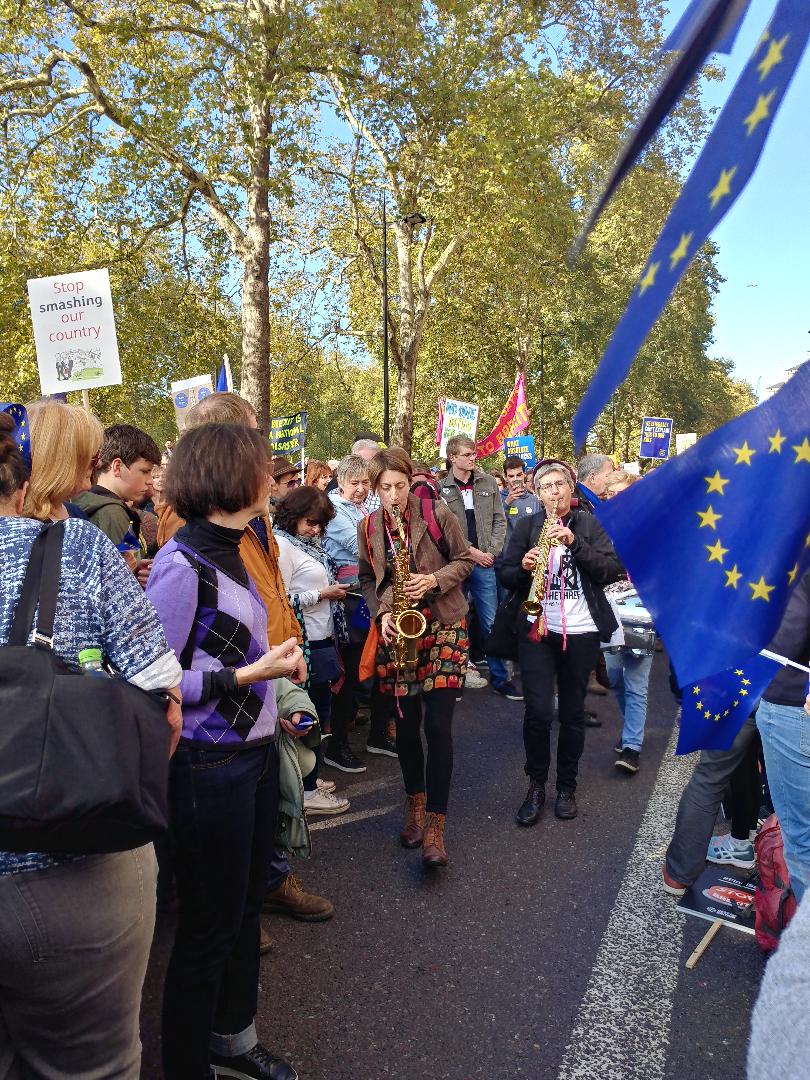 “These two or three orders take the same amount of time to process as ALL the EU ones and cost about £30 more each – her daughter genuinely thinks that her business, which supports her family and 10 employees, will not survive,” said Karen. “Sobering stuff – how many other businesses across the UK will be in this position?”

Most people in the St Albans group did not manage to start marching until a few minutes before 2pm   ̶   and the sheer numbers made it more of a shuffle than a march   ̶   but the atmosphere was great, very peaceful but energised with people shouting and singing and various drumming bands playing and some DJs on the street at one point. All in all, central London was a sea of people in blue that day. 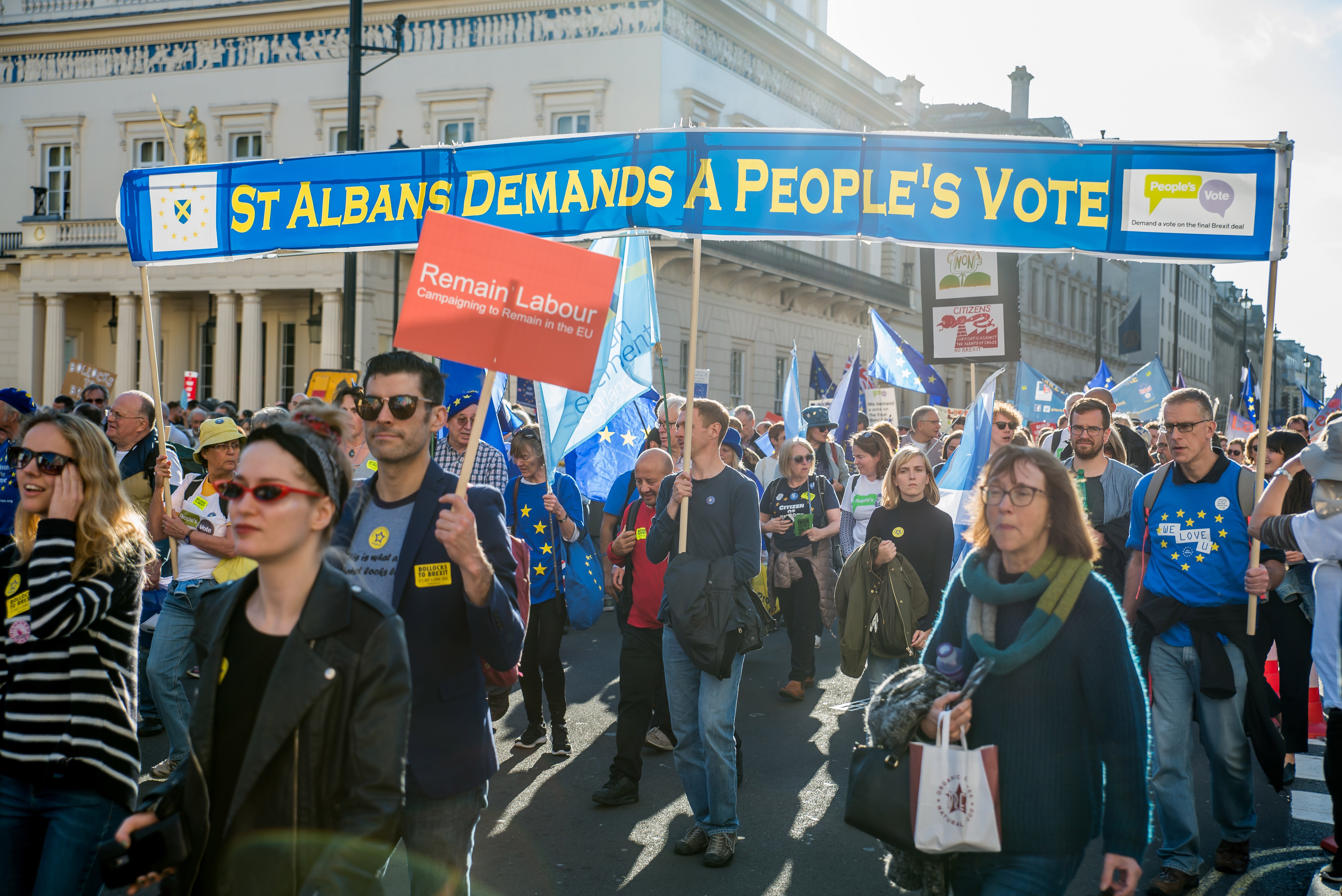 Photo above taken by Ricky Barnett

“We got as far as Trafalgar Square and actually missed all the speeches,” said Karen. “But how fabulous that this was due to over 700,000 people being on the route! We walked away in the throng of people proudly carrying their banners and it felt so uplifting to have been part of this incredible day.

“Whatever happens now, 700,000 people have made it very clear, that we shouldn’t be ignored and that a final say on the deal that transpires needs to be given to the people, as it is our futures and livelihoods that are at stake.”