London is a single electoral region. We will have eight MEPs.

The table and supporting text in this section are taken from the Electoral Commission’s guidance for regional returning officers. You can read their description of the seat allocation method on Pp75-77:

The first seat is allocated to the party or individual candidate that has received the highest number of votes cast in the electoral region.

Each subsequent seat is allocated to the party or individual candidate that has the highest number of votes after the following calculation, which is carried out after the allocation of each seat:

At every stage of the calculation the figure to be divided is the original vote total for the party or individual candidate. 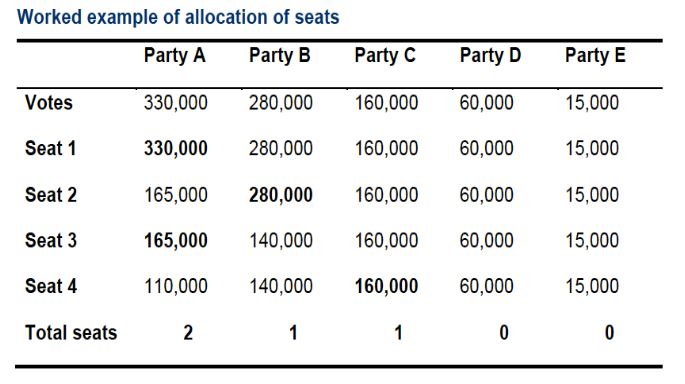 In the worked example in the table above there are four seats available and these have been allocated as follows:

Well, anything is better than first past the post. The charts in this 2019 explainer "European Parliament elections in the UK" from the Institute for Government show the difference between votes and seats. The steeper lines in Westminster elections compared with the 2014 European Parliament elections show how FPTP is generally more biased towards larger and regionally concentrated parties.

You cannot have a perfectly proportional system because you might end up having say 60% of a legislator.  For example, in the Electoral Commission’s table above a purely proportional allocation of seats would have been as below:

The D’Hondt system has a bias towards large parties or coalitions. That bias is more acute the smaller the constituency and the larger the number of constituencies. At the national level, Parties D and E might have won enough votes in total to have earned an MEP (assuming there was no minimum threshold to prevent excessive fragmentation).

Let’s imagine that Party C was a coalition. If it had instead fought as three parties who each received an equal share of the coalition’s total, so 53,000 votes each, then the final result would have been: Party A: 2 seats, Party B: 2 seats, the parties that made up coalition C: 0 seat, Party D: 0 seat. That is what leads some commentators to regret that the Remain parties are not fighting on a single platform.

In 2014, this was the result by percentage of vote and seats. The bias towards parties that are larger or regionally concentrated (SNP, PC) is clear (these Electoral Commission figures are for GB while the slightly different IfG figures in the chart above are for UK):

Here is the equivalent table for London in 2014, a reasonably large electoral district: 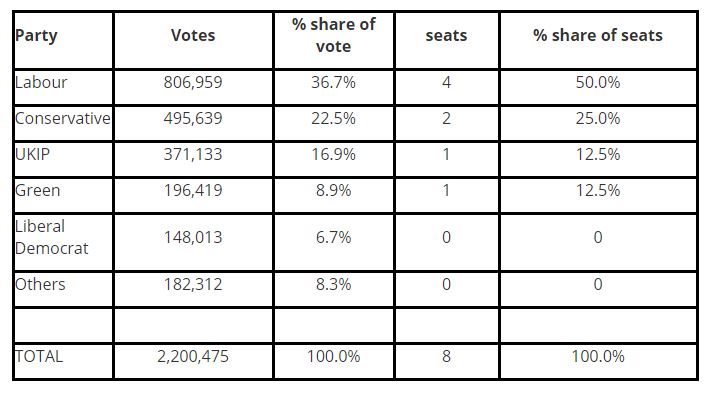 You cannot really target an individual

Suppose that Party X has a list made up of

You are certainly unable explicitly to vote for candidates 1 & 3. It’s this party or another party. If you knew how everyone else was going to vote you could cast your vote to obtain a particular result. So if you knew that Party X would win either zero or one seat you could add your vote and hope to elect candidate 1. But no matter what the opinion polls say you do not really know that.

So you do have to look at the slate when deciding for which party to vote. That said only the higher ranked candidates have a realistic chance of winning, so those are the ones to consider.

As with every electoral system, voters need to ask themselves whether their preferred candidate (party) has a realistic chance of winning a seat.

If the answer is No, then voters have to ask themselves whether it is better nonetheless to vote for their preferred choice or whether to vote for the next best candidate/ party that has a real chance of winning a seat.

For supporters of smaller parties the problem is less acute than it is in most constituencies in a Westminster election, but it is still there.