A coalition of grassroots pro-EU organisations has come together for an Action Day on Saturday 17 February in support of the 'One Day Without Us' campaign to celebrate the contribution of migrants to our society and highlight the vital work of EU staff in the NHS.

This follows revelations in a leaked government Brexit impact analysis that the cost to the British economy of cutting migration from the EU would be significantly greater than the benefits of a US trade deal.

The European Movement UK, Britain for Europe, Healthier IN and others are backing the ‘One Day Without Us’ campaign, which has the slogan “Proud to be a migrant/Proud to stand with migrants”, with hundreds of grassroots supporters giving out leaflets and organising local events across the country. 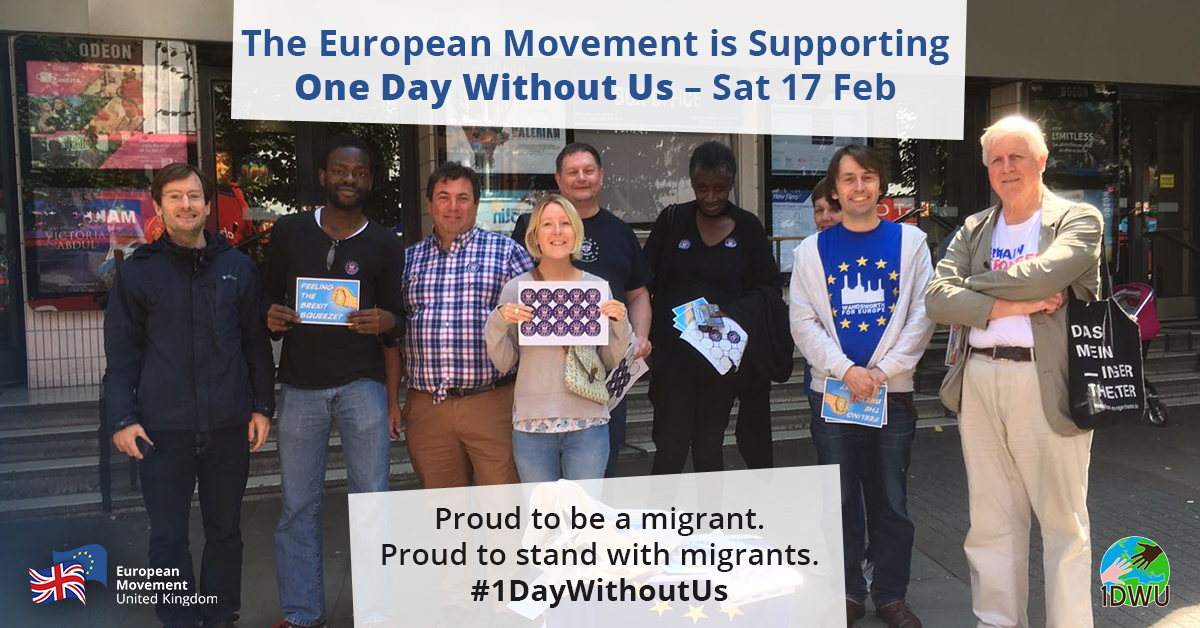 “EU citizens make an enormous, positive contribution to our country. Nowhere is that more apparent than in the NHS. Brexit will have a devastating impact on EU citizens coming to work, use their skills and pay taxes in the UK.

“We need to remember how to feel compassion and the great values which have driven much of the UK’s evolution.  The European Movement has many of these same values at its core: celebration of diversity and other cultures; partnership, collaboration and common interest; respect and tolerance; protection of rights; and helping to foster peace between people across Europe.

“Let’s celebrate the contribution people from EU and non-EU countries make to our society – and to our NHS.”

“Our NHS is in the midst of a staffing crisis and this government's lack of clarity on Brexit has meant EU staff have been leaving in droves. No one voted for fewer nurses, GPs or care workers but that's what we're getting. This is not the will of the British people, it's the weakness of Theresa May and the rabid ideology of the minority of MPs that are holding her hostage. Sadly, it's our NHS and patients that are paying the price.”

“If the UK is to remain relevant then it needs to remain an open country with close ties to neighbours and partners in mainland Europe and on the island of Ireland. Britain for Europe wants the UK to retain its EU membership and safeguard freedom of movement and citizens’ rights – this has enriched our country in many ways and has enabled young people and retirees to experience life abroad without unnecessary barriers.”

If you would like to get involved in the European Movement Action Day find your local event.

The events that One Day Without Us are promoting can be found on their website here.