Former Liberal Democrat Leader and Deputy Prime Minister Nick Clegg has written a book both debunking the myths around Brexit and offering a solution as to how it can be reversed. 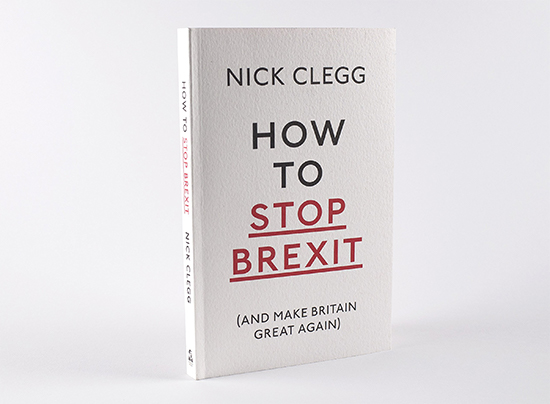 I have just finished reading Nick Clegg’s new book: it is both insightful and is the campaigning guide that all Remainers have been waiting for! It should be compulsory reading for anyone who wants Britain to stay in the European Union as it contains detailed, precise checklists of exactly what you can do to change Britain’s future. He calls you to arms NOW – it will be too late in a year.

Clegg’s arguments and analyses have the insight that comes from a man who sat at the centre of power when decisions were made – he saw the process in action. He also experienced at first-hand what pressures can be brought to bear on a Member of Parliament to change their attitudes, and ultimately the  vote of your representative on the most vital issue in Britain’s modern history.

If you feel troubled by the slogan “the people have spoken, Brexit must now be done”, Nick explains why you should feel perfectly comfortable acting as an ordinary consumer who has been mis-sold a product or service and find it damages you. Go back and say you have changed your mind now you have found out how it actually works.

Clegg names the Brexit elite - in the far away world of money and media – who trampled on us and are now trying to oppress the just-a-minority. At the General Election, 1.2 million young voters joined the register. On any analysis of voting patterns, they would have changed the result that is taking away their future. He also names the Cabinet ministers – from the Prime Minister onwards – who are the representatives in Parliament of Remain-voting constituencies yet who say it is OK to over-ride “the will of the people” in their particular constituency.

Buy the book straight away, read it carefully and mark the passages where you want to respond with your actions. Then mark the arguments that support what you want to say on the street/stall. Also mark the sections that will enable you to rebut the Leavers’ arguments – Clegg provides all the references for you.

Clegg has shown that a number of MPs can be influenced into standing firm when Parliament votes on the Brexit Deal, and the Remain community must now focus on identifying and persuading them to do so. We must have a detailed knowledge of the constituencies where you must make the force of your influence felt, including the 176 Tory MPs (out of 317) who voted Remain. The European Movement will therefore give its members the tools to read up the full stories from Clegg’s references and provide you with the details of the facts he gives you so that you can campaign with full confidence that you have the arguments to win. We can and must Exit from Brexit.

I commend this book to you.

Graham Bishop is a member of the European Movement's Executive Committee and an experienced consultant on European Integration. You can sign up to receive his briefings and more through his 'Friends Membership' at GrahamBishop.com.