The polls failed to spot rising pro-Remain sentiment in May

London4Europe Committee member Michael Romberg compares the story told by the opinion polls for London with the actual results. A parallel blog published today looks at the results and asks What if?. A separate blog compares the results in 2019 with those in 2014.

This article looks at the London regional section of national opinion polls and one London opinion poll (Chart 4 has national figures).  As far as I know we have recorded all published opinion polls about the European Parliament elections voting intentions that have regional tables. The actual result is in the London charts and tables - shown as a square at the far right of each chart.

You can look at a UK/ GB level tracker graph on the National Centre for Social Research's WhatUKthinks website here. NatCen allows you to group parties, for example into Brexit and Remain. Wikipedia also has a table of results for UK/GB opinion polls and a tracker graph with a slightly different selection of polls. Both sites show the underlying national data in tables.

The general story that the polls had set out

How close to the result?

In addition to the margin of error on polls, one has to remember that people react to polls. So if the polls and the outturn are different, it may be because the polls were right and people changed their behaviour in response.

Now, looking at the actuals - the big squares on the right of the charts - we can see that:

Not all electors will have interpreted the polls in terms or pro/ anti-Brexit. For some voters Brexit/Remain was not the main issue.

Others would have failed to realise that Labour was pro-Brexit, or hoped that it would change to become pro-Remain. The decision by the People's Vote campaign to treat Labour as pro-PV will have made it easier for some Remainers to vote Labour.

Polls are just snapshots that come with a significant margin of error particularly so when you are looking at a small or very small subset of a poll, as almost all of these London figures were (we give the figures for the London sub-set in Table 1). ComRes publish a margin of error calculator. The London electorate is 5.5m. The largest poll had a sample of 1,111. The margin of error was 3%. So if the poll said that 15% would vote for party X, you could be 95% sure that the true result would be in the range 12-18%. The smallest sample was 83. Here the margin of error is 11%, so the range for party X would be 4-26%. For a more typical 200 London subset sample, the margin of error would be 7%. So one should never read too much into small differences or unusual results.

Trends are a bit more reliable, but bring the problem that different companies have different methodologies (see more on that in a blog by YouGov's Anthony Wells). We provided graphs with trendlines and moving averages of the last ten polls. But that relied on the errors cancelling each other out.

You will understand the problems that the wide margin of error on polls with small regional samples and the complexity of D'Hondt presented to those offering tactical voting advice at the regional level. London4Europe advised not to vote tactically, but rather to vote strategically for the Remain party of your choice. Our parallel blog published today as it were gives tactical voting advice with the benefit of hindsight (and reaches the same conclusion on the value of tactical voting).

There is a fuller list of caveats after Table 1, as well as notes and general points on interpretation.

A recent blog by London School of Economics academics at the Electoral Psychology Observatory shows why reading opinion polls is actually a lot more complicated than it looks.

We published individual calculations for each poll showing the implied number of seats in London, three Eurotrackers that brought the results together and included graphs with trendlines, and a graph that smoothed the spikes by using moving averages. All these are available in the latest blogs section of the website. 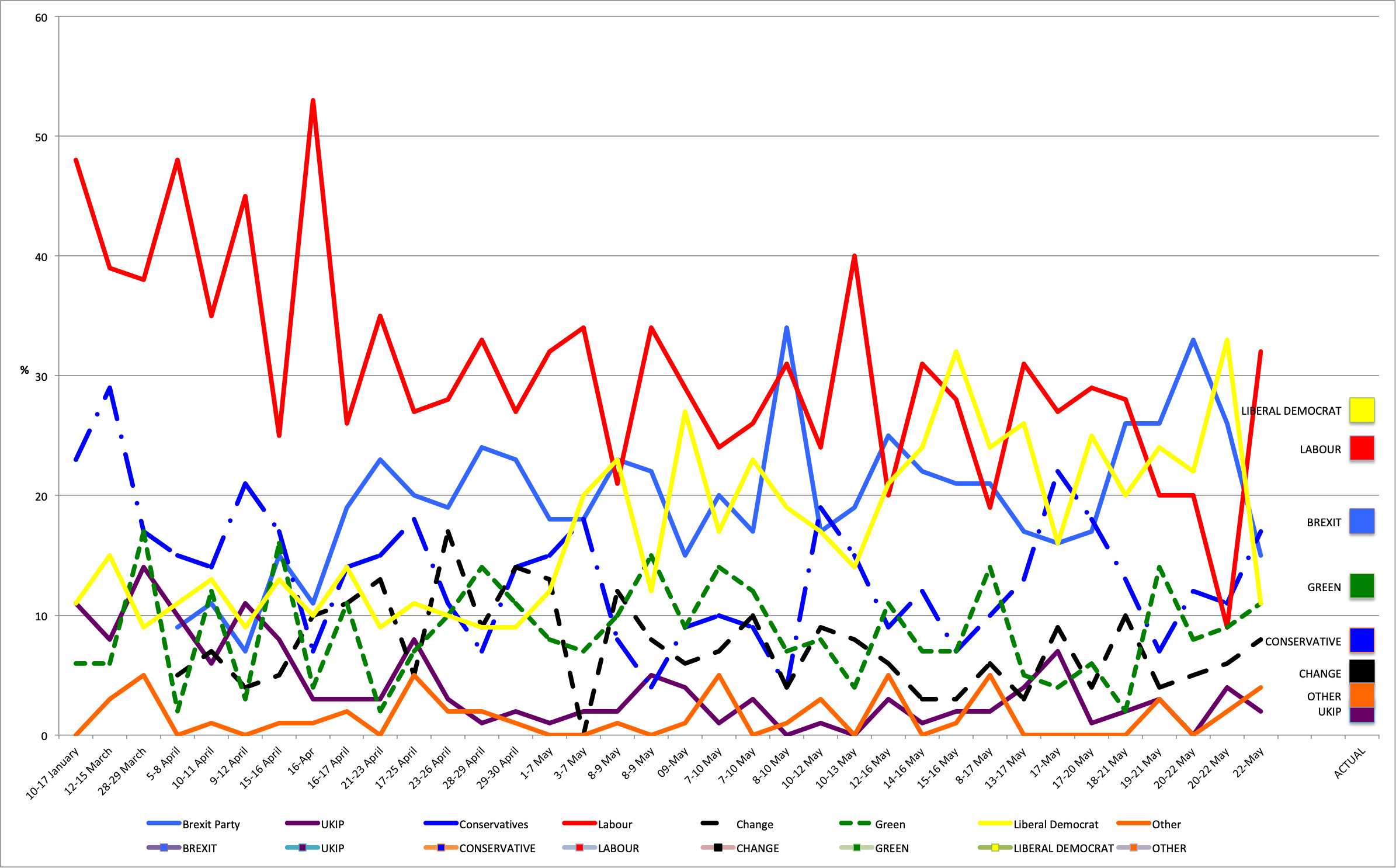 CHART 2A: Vote Tracker for Remain parties - only includes polls that asked about all three parties. Note that some of those polls were taken before the 23 April launch of Change UK's European elections campaign  (29 March - applied to be registered as a party; 16 April: approved as a party). Trendlines calculated by Excel. The calculation ignores that the time interval between polls is not constant. Opinion poll points; and actuals

CHART 2B: Vote Tracker for Remain parties - only polls with fieldwork undertaken in May.  Trendlines calculated by Excel. The calculation ignores that the time interval between polls is not constant. Opinion poll points; and actuals 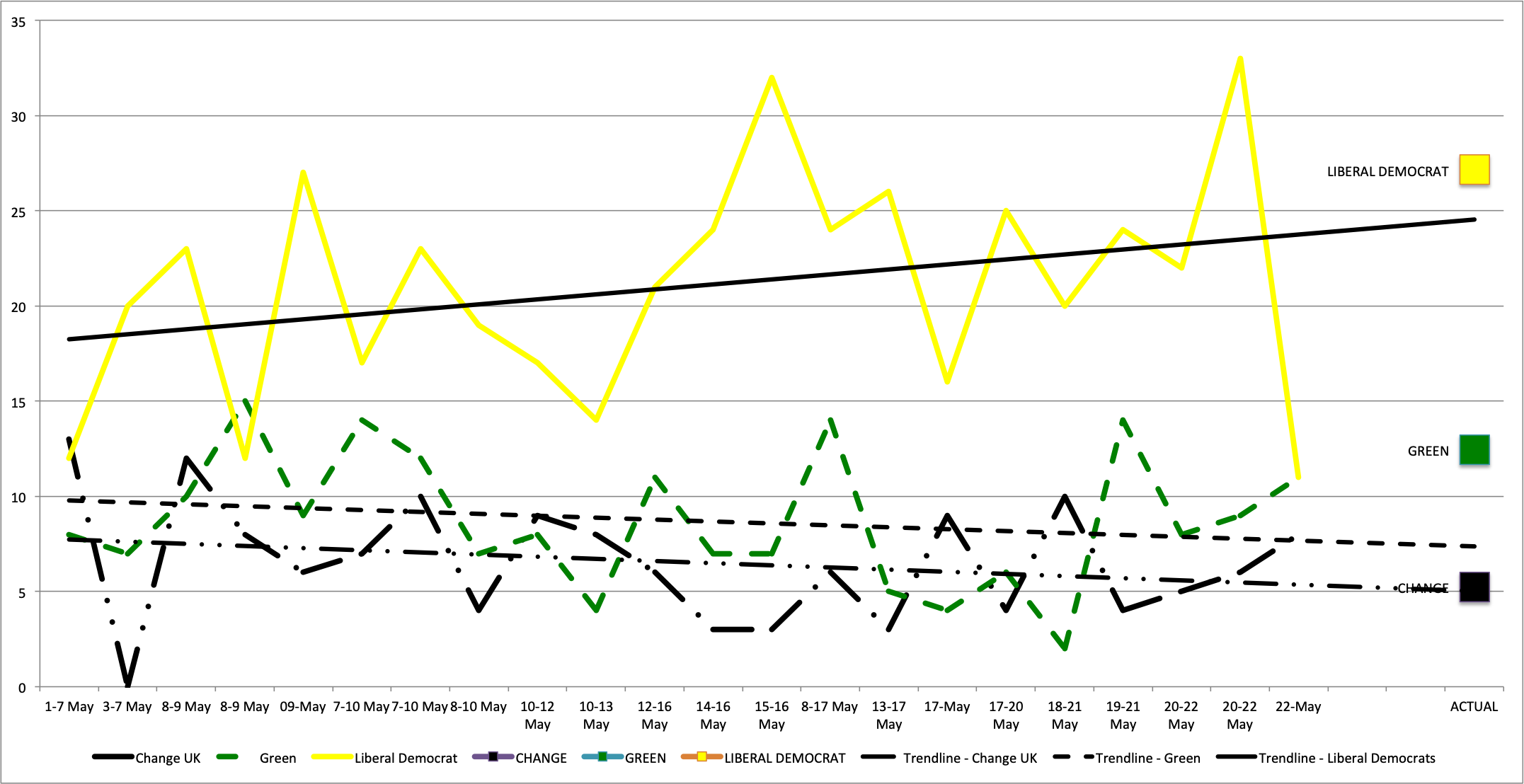 CHART 3: Vote Tracker showing the total pro-Brexit vote (Brexit Party, Conservative, Labour, UKIP) and the total Remain vote (Change UK, Green, Liberal Democrat). Other is excluded. The trendlines have been calculated by Excel. The calculation ignores that the interval between polls is not constant. Opinion poll points; and actuals. 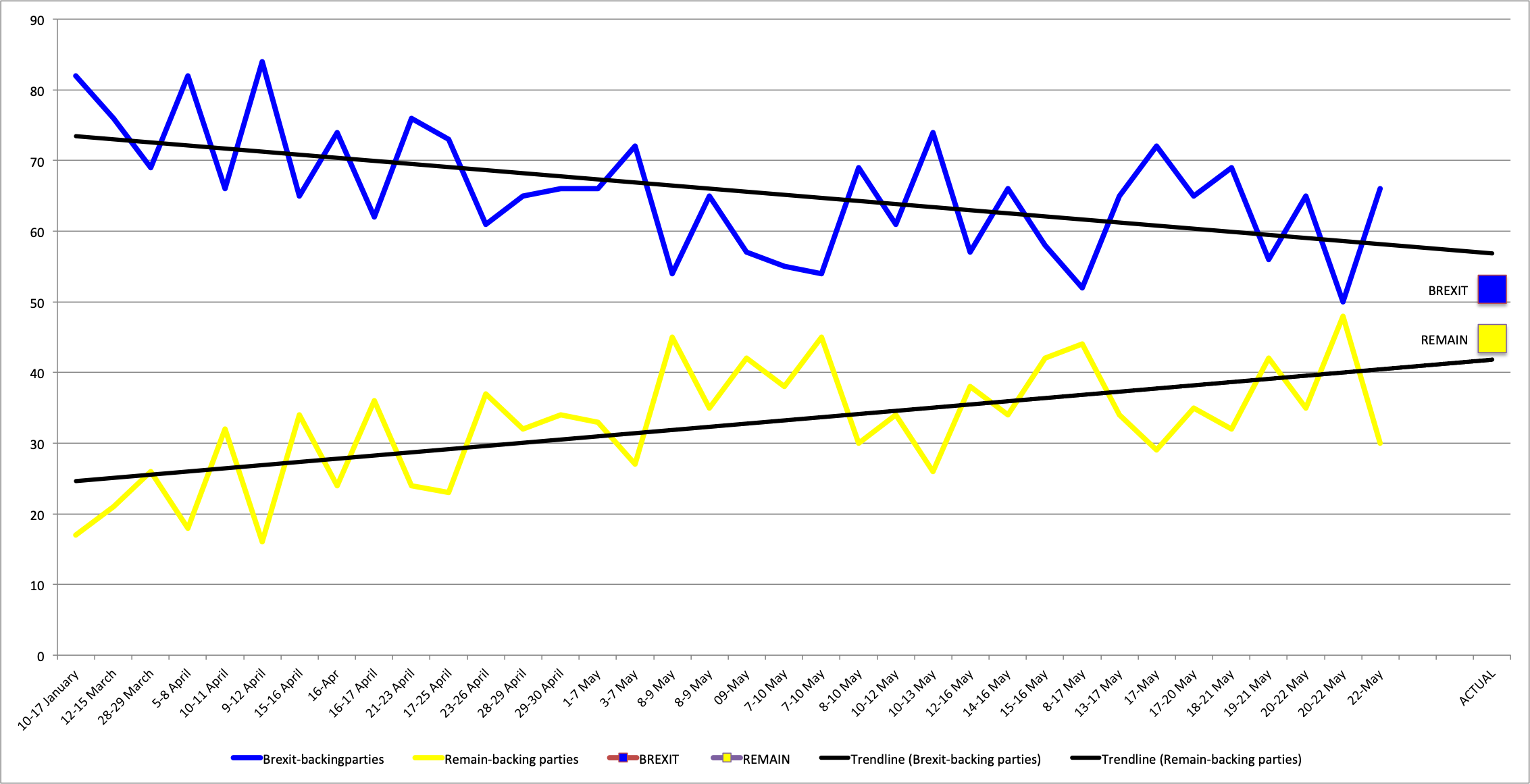 CHART 3A: Vote Tracker showing the total pro-Brexit vote (Brexit Party, Conservative, Labour, UKIP) and the total Remain vote (Change UK, Green, Liberal Democrat). Other is excluded. Only polls with the fieldwork conducted in May. The trendlines have been calculated by Excel. The calculation ignores that the interval between polls is not constant. Opinion poll points; and actuals 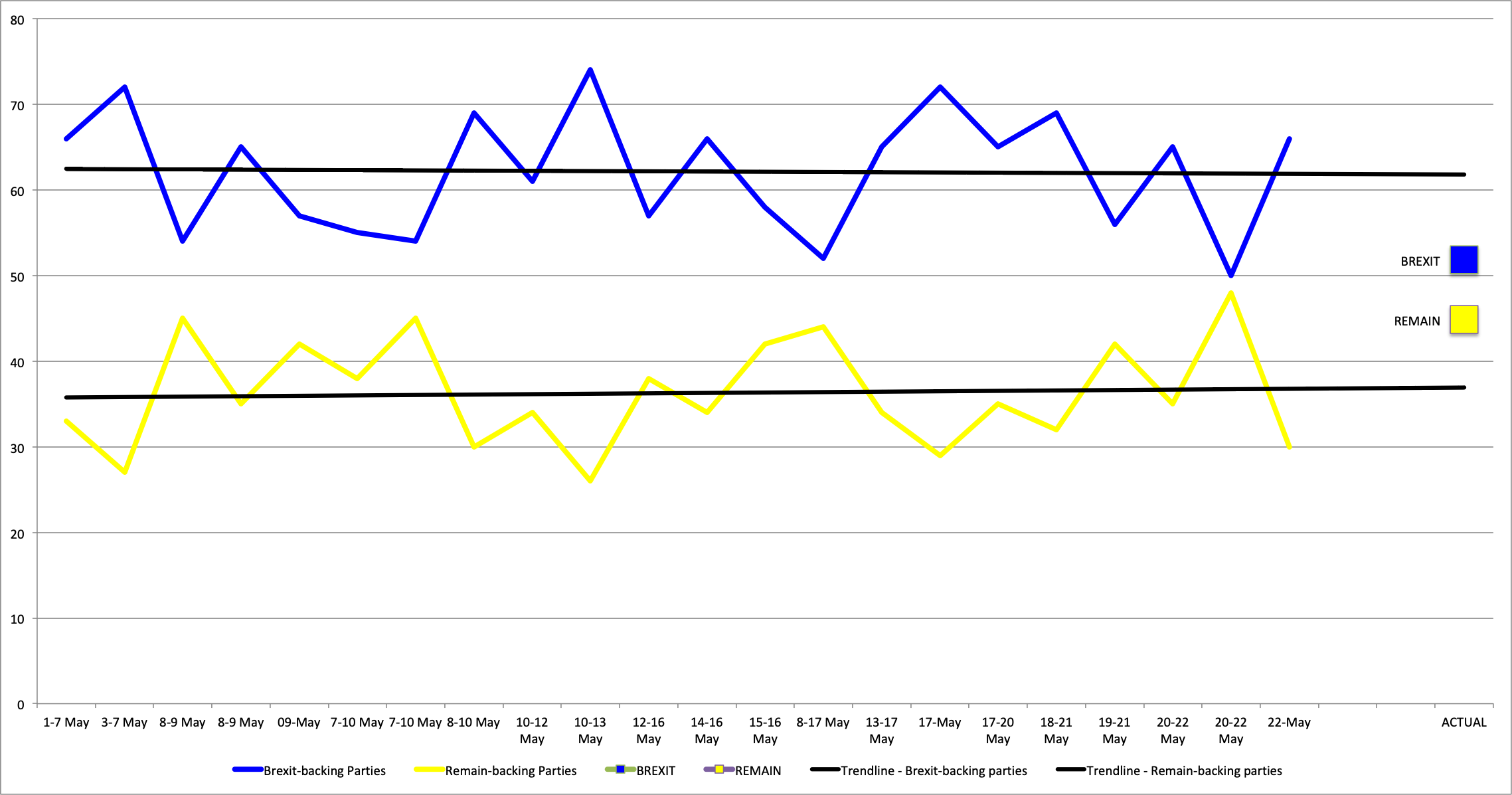 TABLE 1: Vote tracker. This table looks at the % share of the vote in successive opinion polls. It also gives the size of the London subset of the opinion poll (LSS). Actuals are in the final column. 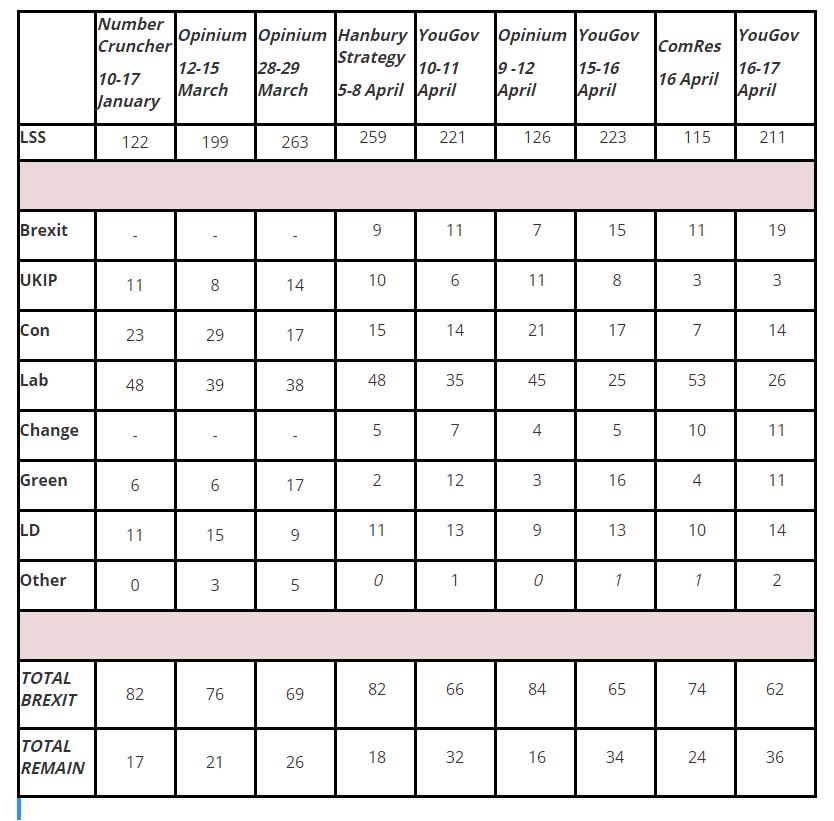 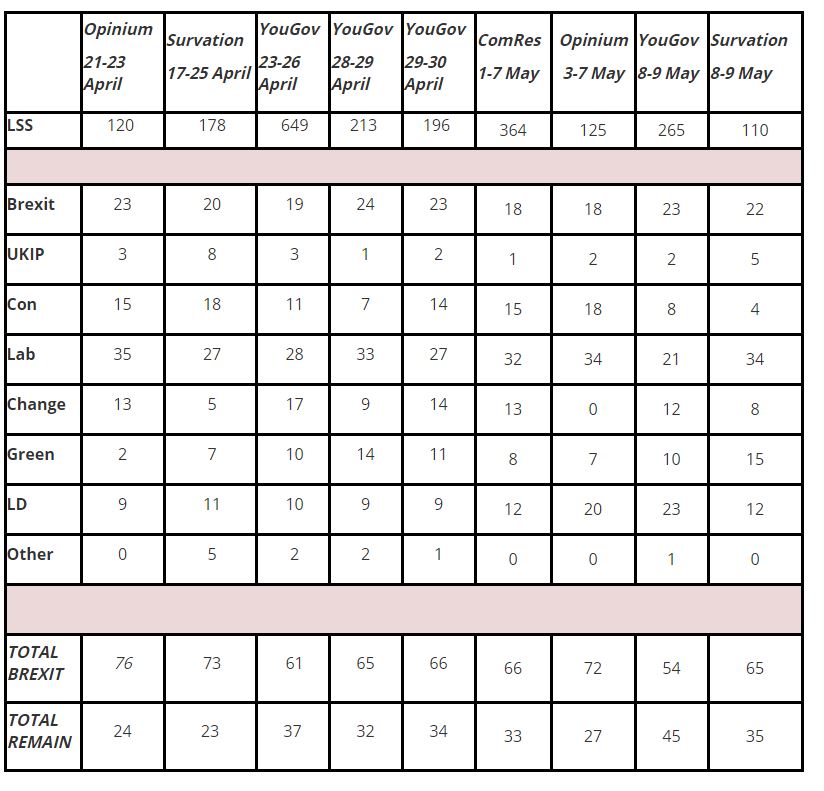 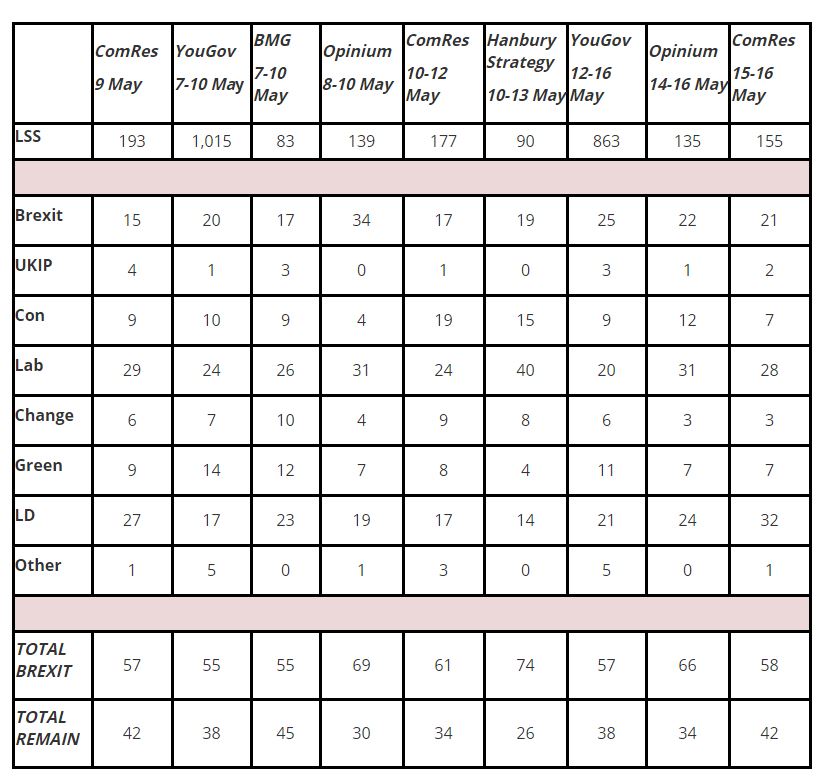 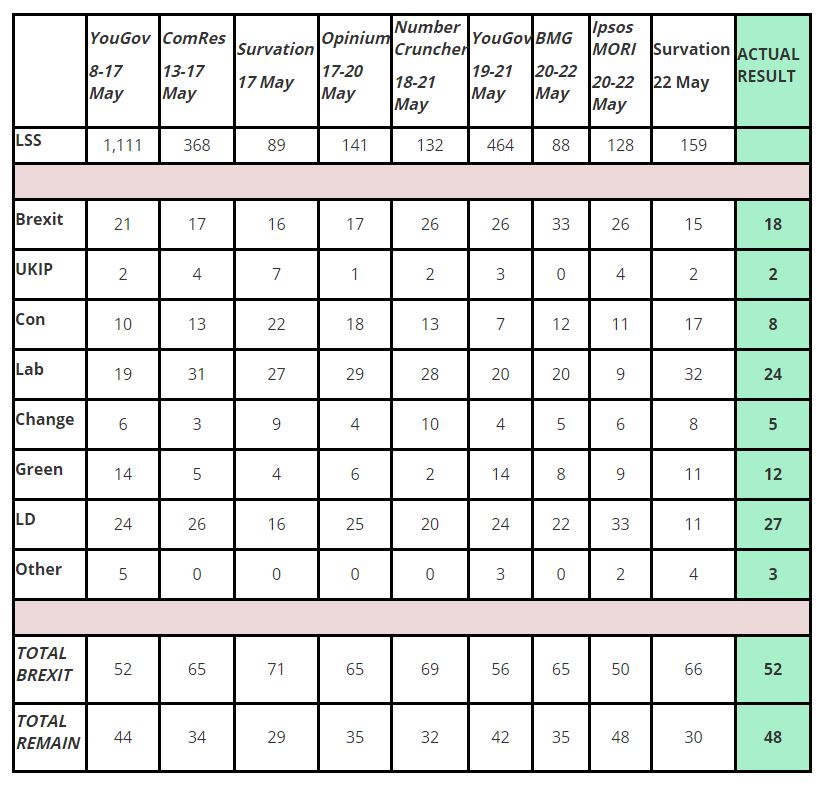 TABLE 2: Seat tracker. This table looks at the seat allocation implied by successive opinion polls. Seats have been allocated using the D'Hondt formula. You can read up how that works here. You can look at the individual calculations with links to sources in a series of individual blogs with the title "Polls into seats" in the latest blogs section of the website. Actuals are in the final column. 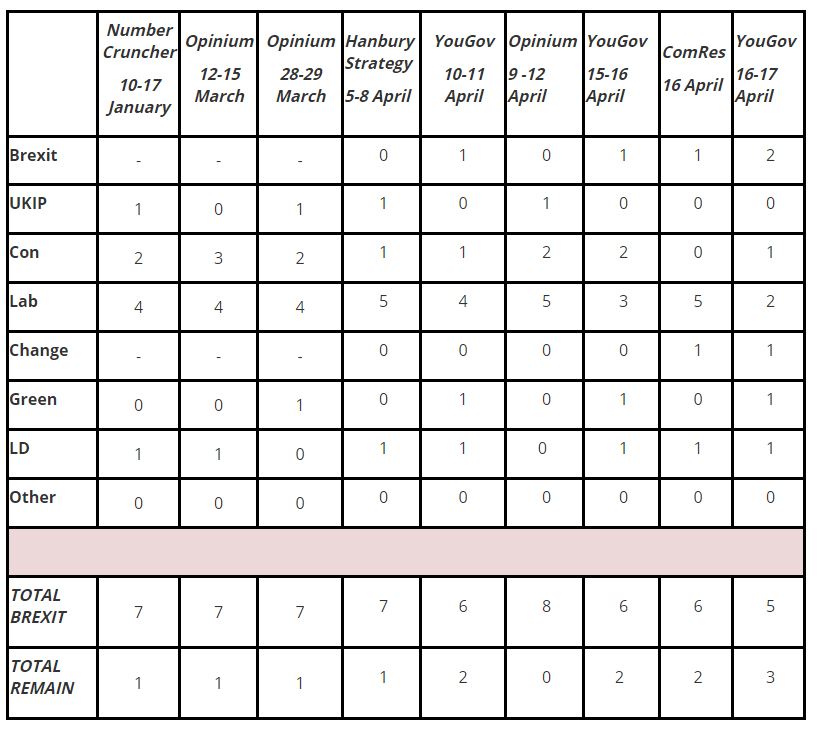 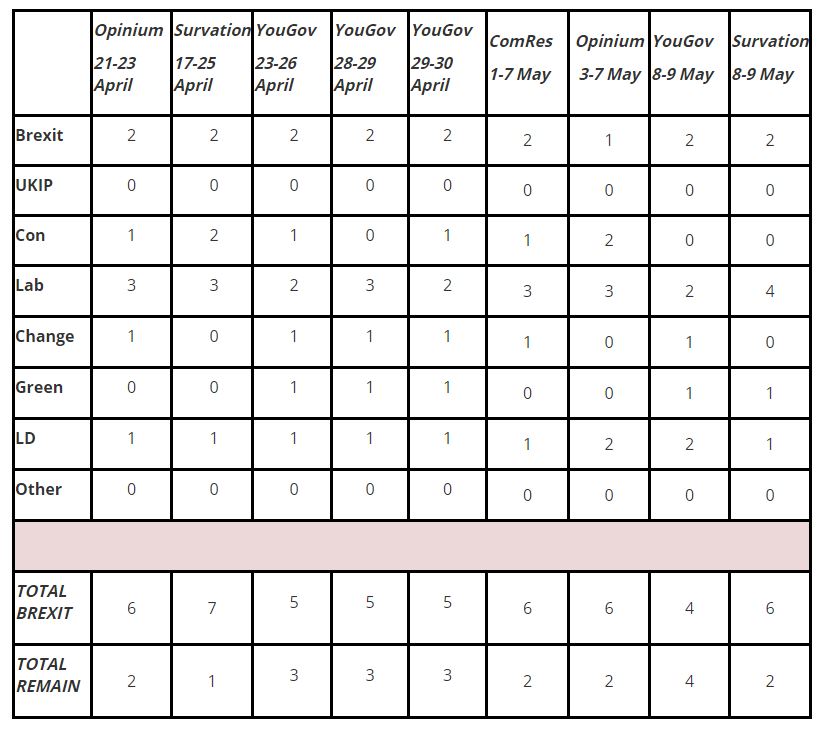 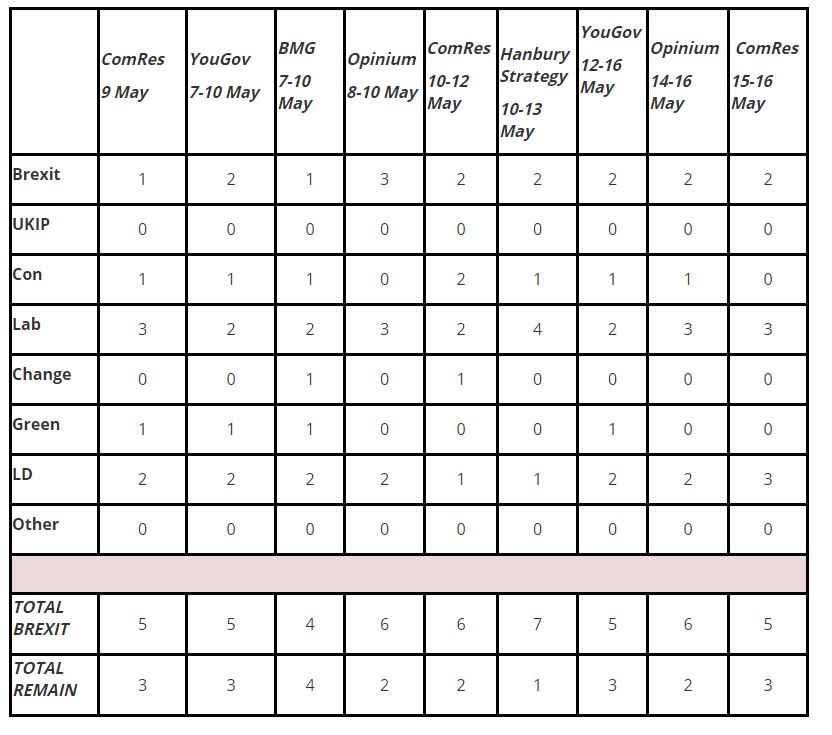 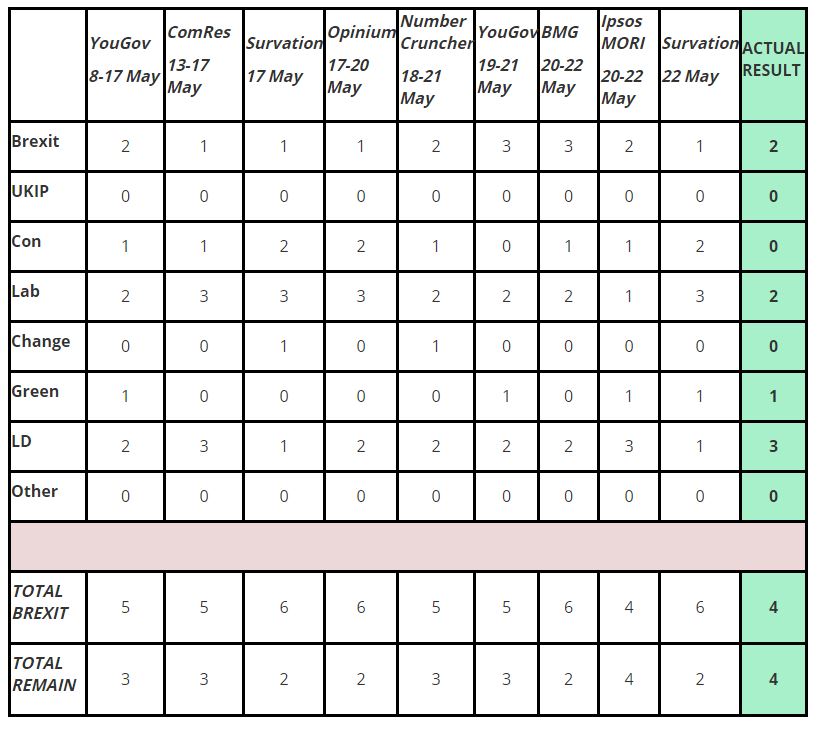 This article was originally published on the London4Europe website here