Lincolnshire European Movement has been taking their Brexitometer on a mini tour of Lincolnshire with some incredible results.

Starting in Grantham, the birthplace of Margaret Thatcher, a key architect of the European Single Market, campaigners arrived early in the morning with a bit of trepidation. Lincolnshire EM had been told that the town was very hostile before the referendum and was a difficult place to campaign. Yet within 5 minutes of setting up our Brexitometer, they were receiving support for the People’s Vote. They did of course receive some forthright views in support of Brexit, but they were in the minority. Pretty much everyone was civil, and pretty much everyone agreed that the Government has not made a good job of Brexit and the support for a People’s Vote was strong. 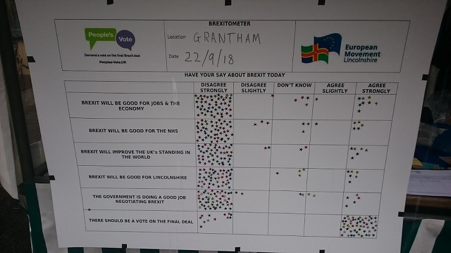 Lincolnshire EM then then took our campaign to Lincoln where they attended the Lincoln Pride event. Very quickly they discovered what the young people of Lincoln thought about Brexit. They collected more signatures for the People’s Vote petition in half an hour than some London groups collect in a whole morning. Our Brexitometer was also extremely popular; so much so that they had to go and buy more stickers. 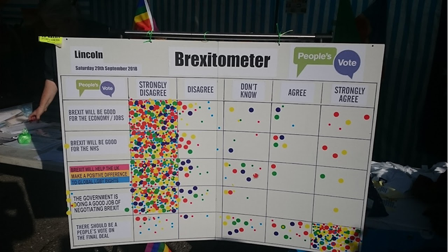 Finally to Spalding, the town where the branch was founded in 2017 and at the heart of the second highest leave voting constituency in the country. Was the trend seen elsewhere in Lincolnshire going to be repeated? It was to a certain degree, but they were up against the elements with heavy rain most of the time. Most shoppers were dodging the rain. Nonetheless, the trend seen elsewhere was repeated with a 2:1 majority in favour of a Peoples Vote. 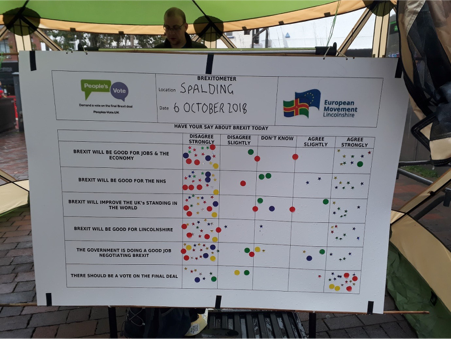 Lincolnshire EM are working on plans to take our Brexitometer to other parts of the county to see if the trend is repeated.

Meanwhile their coach from Lincoln to London for the March for a People’s Vote on 20th October is filling up fast. Tickets are on sale at https://www.eventbrite.co.uk/e/coach-to-peoples-vote-march-for-the-future-london-tickets-50717192488

You can find out more about Lincolnshire European Movement on the following channels:-