Brexit supporters are organised and disciplined in their constantly repeated sound-bites. Almost every day you can hear the mantra “Take back control of our money, borders, laws and trade”.

Constant repetition of this line is aimed at it becoming a commonplace, something that is accepted without discussion.

Yet the assertion is false.

The money that the UK chose to spend through the EU amounts to a tiny sliver of overall public spending, as this chart shows: 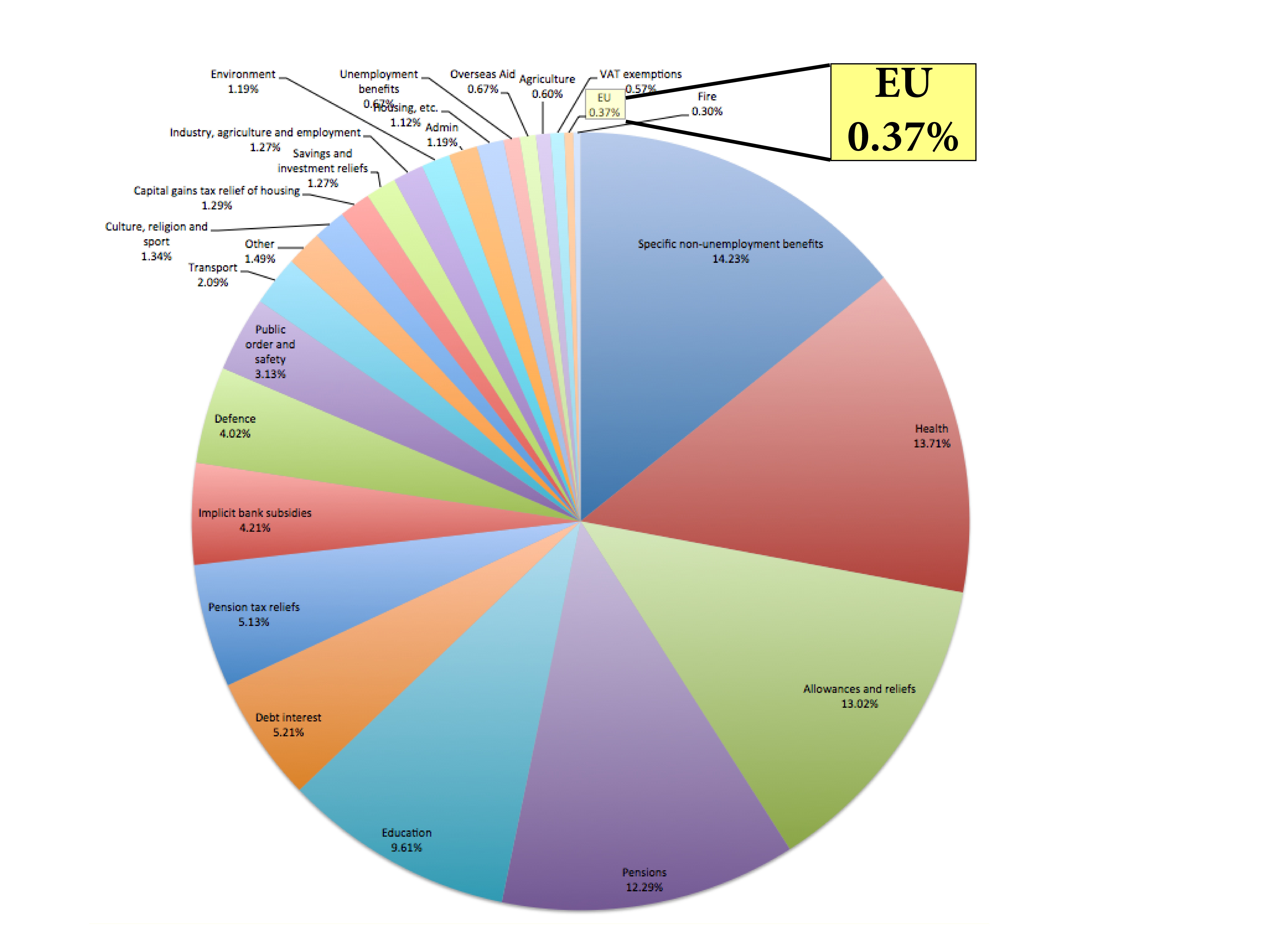 And spending at European level can save money at national level, through sharing costs, avoiding duplication, or economies of scale (EU research programmes being a good example).

By contrast, leaving the EU will cost us far more money than we could possibly save from our membership dues. Just the need for up to 5,000 extra customs officials and trade lawyers alone will cost £300 million extra per year, according to the head of HMRC.

Above all, the expected reduction of economic growth would mean less tax revenue. The government’s own figures show that, over the next fifteen years, this would be a loss of between 2% (if the UK stayed in the single market) and 8% of GDP (with a no-deal Brexit) potentially costing millions of jobs and up to £80 billion.

We retained full border controls as an EU member — along with Ireland, we are outside the borderless Schengen area. No one can enter the UK-Ireland Common Travel Area without being checked.

Yes, we have agreed arrangements with many countries to allow visa free access to the UK and, for EU citizens, a reciprocal right of residence subject to conditions (that we rarely enforced). But the border is where we police entry, verify entitlement, and where appropriate, refuse admission. We are in fact better able to police our borders as a member of the EU, for three reasons.

Don’t be fooled by soundbites. We control our borders better as an EU member.

Britain’s laws are enacted by its sovereign parliament. That same Parliament has decided that some laws – amounting to about 13 percent of them according to the House of Commons library – should be made jointly with our neighbours in the European Union. Such laws are mostly about common rules for our common market covering such matters as consumer protection, product standards, fair competition rules, and environmental standards where it is simpler and more effective to have a single set of rules rather than divergent ones.

Those laws are not enacted by the European Commission, as some claim.  The Commission only makes proposals. All Commission proposals are first sent to national parliaments, giving them the opportunity to mandate their ministers before they go to Brussels. The proposals only become law after they are debated, amended and passed (or rejected) by the ministers and also by directly-elected MEPs.

Outside the EU, even with a distant relationship to the single market, Britain will still be following many of  those rules. The EU often sets the standard for environmental and consumer protection rules, for competition policy and so on, frequently followed across the world. Even where we might choose to diverge in our national rules, our exporters (the EU is by far our main export market) will have to comply with them for their exports.

But, outside the EU, we will no longer have a say on the decisions that will affect us anyway. We will have become rule takers, not rule makers.

Leaving the customs union would harm our trade in two ways:

Even with more time, it is unlikely that the shiny new trade deals promised by Liam Fox would come anywhere near replacing lost trade with our immediate neighbours. Countries across the world have made concessions to the EU in trade negotiations in order to gain access to the world’s largest market. They are unlikely to make commensurate concessions to Britain alone.

As a trading nation, and with trade vital to our economy and food supply, leaving the EU customs union is shooting ourselves in the foot.

We would lose control in negotiating with major trading partners like the US, who would likely refuse to do business with us unless we allowed products that are standard in the US, such as chlorinated chicken and hormone treated beef into our supermarkets. We could also lose control over our trade deals with third countries.

As my Labour colleague Jude Kirton-Darling MEP notes, the European Parliament currently provides democratic oversight for any trade deal carried out between the EU and another country. The government has offered no no assurance that it will allow the Commons to have any similar control mechanisms. Elected representatives will lose control.

As with many of the mantras of the Brexit ultras, their simplistic phrases belie the complicated truth. In international relations, contrary to their assertions, the UK cannot just make demands and expect the EU, or indeed the rest of the world, to give us exactly what we want. Any form of international agreement requires some nominal loss of sovereignty and compromise, but this is balanced with mutual benefits and agreed routes for appeal if either party breaks the rules.

Framing cooperation as a loss of control is a populist rhetorical device that is starting to be exposed as such, as the government is finally having to face the hard reality of what Brexit really means – and how much we, as a country, actually stand to lose if we leave the EU.

This article was first published by on the website of Richard Corbett MEP, Leader of the Labour Members of the European Parliament and Vice-Chair of the European Movement UK. Click here for more blogs about the EU or in depth Brexit Briefings.