One Million Plus! - European Movement
DEBUG: https://d3n8a8pro7vhmx.cloudfront.net/euromove/pages/4077/features/original/EM_Oswestry_march.jpg?1554729463
DEBUG:
DEBUG: blog_post
One Million Plus!

My name is Linda Bradbury, and I am a member of the European Movement Oswestry and North Shropshire Branch, who is actively involved in the People's Vote Campaign.

On Saturday 23rd March 2019, I was proud to be one of the 1 million+ who took part in the People's Vote, Put It To The People March in London, demanding a final say for the British public on Brexit. I decided to march because I am passionate about the UK getting a People's Vote and possibly remaining in the EU. 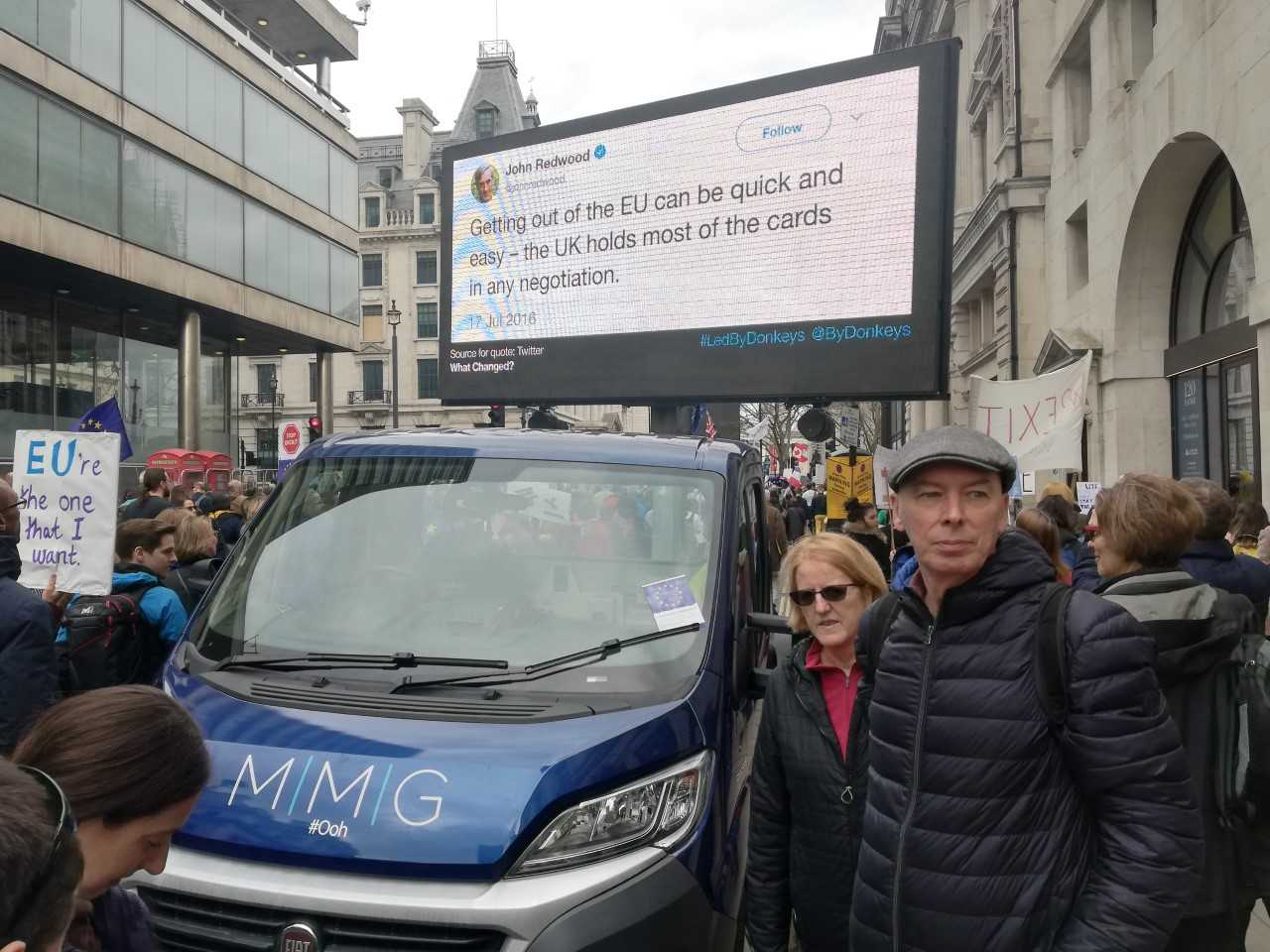 A number of the European Movement Oswestry and North Shropshire branch members and I travelled on the “Oswestry Coach 2 “ from Shrewbury, which was one of the 6 coaches organised by Open Britain Shrewsbury making the journey to London carrying over 300 protesters from all over Shropshire, and the Mid-Wales and North Wales borders. Some members joined the European Movement Wrexham and Gwynedd Coaches, while others made their own way by other means to take part in the march. During the journey, we heard the news that the on-line “Revoke Article 50 and remain in the EU Petition” had topped 4 million, which received cheers from all those on board.

On arrival around 11am, we joined the thousands of marchers already gathering in Park Lane from all corners of the UK and further afield. There was a carnival atmosphere on the march with a backdrop of noise and colour; music, singing, chanting, cheering and dancing along the route being the order of the day. Moreover, the march was soooo colourful, awash in a sea of vibrant blue and yellow, extremely loud, with voices wanting to be heard, and ultimately good natured.

The protestors carried and held aloft an array of large EU flags and other flags, homemade banners, placards, posters, foam hands, drums, horns, whistles and megaphones. The placards and banners were creative and humorous with great images, slogans and strong messages used to get their points across.

There was much chanting from the demonstrators, and the now famous “Call and Response” chant of “What do we Want? A People's Vote. When do we Want It? Now.” and also “Article 50 now revoke” and “Where's Jeremy Corbyn” rang out loudly for the duration of the march. 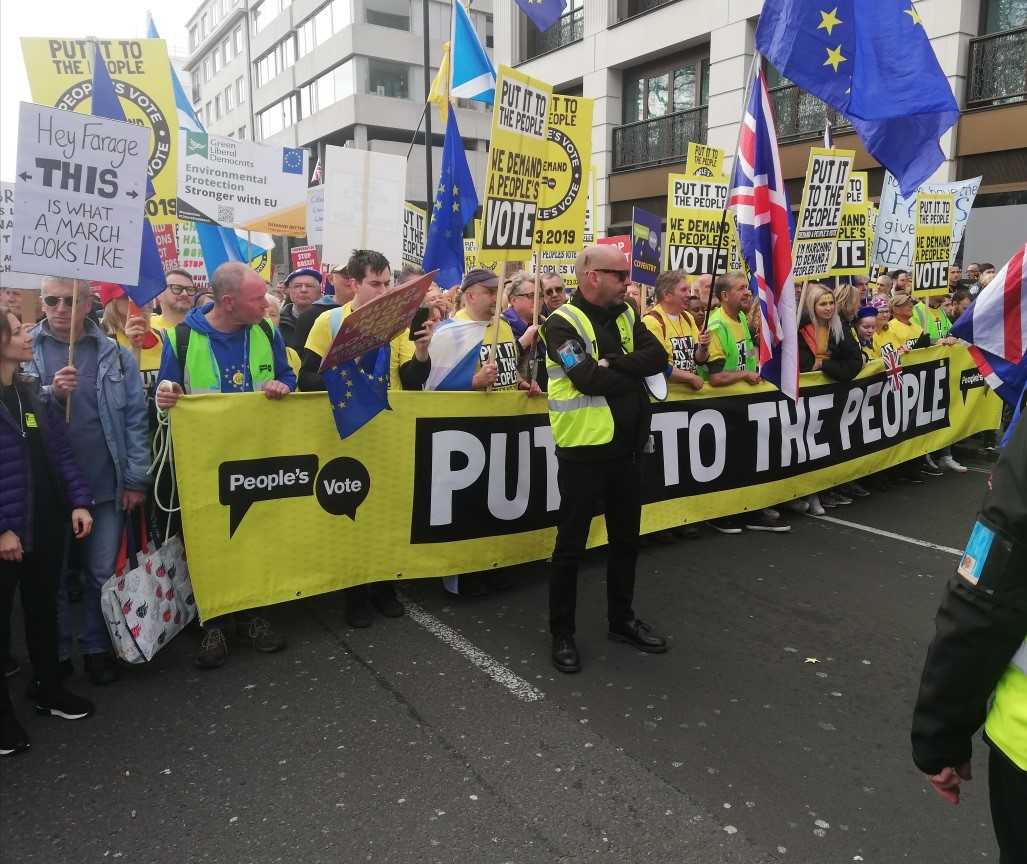 People of all ages, many associated with various Pro-EU groups and from all walks of life were well represented, and it was clear from the large numbers taking part in the march that many young people are very worried about their future. An interesting group making their presence felt were those who originally voted to leave in 2016. They marched as a group wearing t-shirts and carrying their placards proclaiming their “I Am A Remainer Now” stance with pride!

I waited with the Shropshire Group at the start, but as the numbers gathering on Park Lane increased, we became separated. I then weaved my way through the crowds wearing my blue/gold stars bEUret and carrying my large EU flag aloft; joining different groups along the route, passing the Teresa May with the long nose sculpture on a float at Hyde Park Corner, the marchers holding the large Put It To The People banner, the Led by Donkeys billboard and the Cabinet Office covered in anti-Brexit stickers. It was exhilarating to march with other protesters, and experience the amazing vibe and a sense of a shared common purpose - to save the country from Brexit.

I reached Whitehall just before 3pm and got caught up in a huge throng of people, which meant that I was unable to move any further and make it to the rally taking place in Parliament Square. I did, however see and hear some of the speeches on the large screen in Whitehall - Tom Watson, Labour MP, Nicola Sturgeon, SNP Leader, Steve Coogan and of course the hugely inspirational Femi Oluwole - which were well received by the crowds. A defining moment, that drew one of the biggest and loudest cheers of the afternoon was the acknowledgement of the hugely successful billboard campaign by Led By Donkeys, followed by the unfurling of their banner with the David Davis tweeted quote, “If a democracy cannot change its mind, it ceases to be a democracy” 9 Nov 2012. 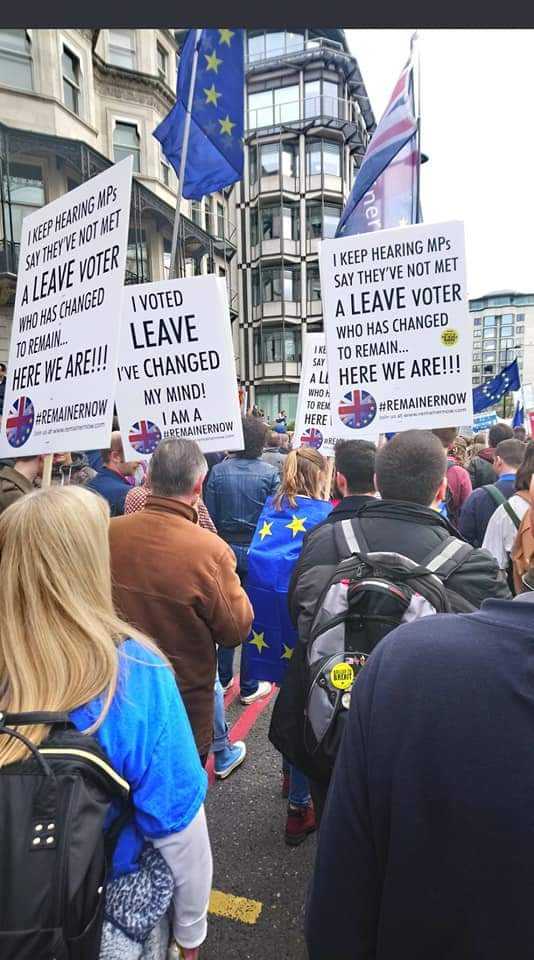 Many that I met along the route told me that they “had to do something” and made the journey to London to take part in the Put It To The People March to support a People's Vote to make their voices heard. The overall feeling being that Brexit is one of the toughest challenges currently facing the UK, and that a “No Deal” or any type of “Brexit Deal” scenario will ultimately be bad for the country, bad for business and will definitely not improve the lives of people living in the UK.

A few Oswestry branch members went down Pall Mall and cut through St Jame’s Park and did manage to get into Parliament Square for the speeches.

All in all we agreed the march had been an amazing experience and the point was made. It was an historic moment in time.