Salisbury for Europe's visit to the European Parliament

Salisbury for Europe took 20 Sixth form students from two schools in Salisbury to visit the European Parliament in Brussels. It was for all of them their first visit and the group was able to meet with three MEPs for the South West and Gibraltar region: Clare Moody (Labour), through whom the visit was arranged, Julie Girling (Independent Conservative) and Molly Scott Cato (Green). 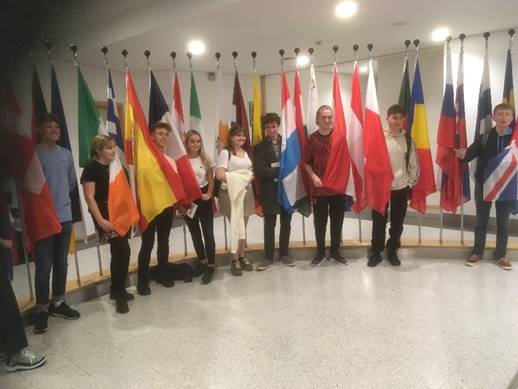 Salisbury for Europe travelled on the Eurostar and stayed over night, visiting the Parliament the next morning and joined a group from the Trades Union Congress Women in Leadership group. The visit gave rise to many discussions and to a revised understanding of how the European Union actually works. Of particular interest was the very different way the politics takes place in the European Parliament compared with the British Parliament. The latter is essentially adversarial and binary, with a voting system that ensures that there are only two major political parties. The European Parliament works by a series of quite loose party groupings which combine in a variety of ways on different issues. Relationship, discussion and compromise are the hallmarks of the system which is backed by proportional voting and semicircular seating arrangement.
The group heard about the remarkable variety of committees including the ‘Horizon Europe’ research programme, the largest in the world, on which Clare Moody is a member. A question was asked about why the EU was excluding the UK from the Galileo satellite security system and they were amused to learn that it had been the UK which had insisted that no non EU member states should be able to be inlcuded.
Salisbury for Europe were given much to think about and twenty young people who will shortly have the vote, returned better informed about the European Union and its institutions. They were saddened that such opportunities – assisted by a grant from the European Parliament, would no longer be available to young people if Brexit goes ahead.
Find out more about Salisbury for Europe:
www.facebook.com/Salisbury4Europe/
salisbury4europe.wordpress.com/
twitter.com/Salisbury4Eur
email: [email protected]