At just before 6:30am last Saturday, 18 people loaded flags and banners into the hold of a coach and clambered aboard to start their road trip from Macclesfield through the market towns of Staffordshire, where they would pick up their fellow People’s Vote campaigners, and South to London to join the hundreds of thousands of like-minded people converging for what they hoped would be the biggest political march of the year. Half an hour later another 18 campaigners climbed aboard in Leek bringing with them more flags, banners, campaign T-shirts and even a box of cakes.

The coach made further pickups in Stone, Stafford, Rugeley and Lichfield and by 9:00am forty four campaigners were heading to London. Campaign t-shirts and cake were handed out. Mike Ottewell,72, from Cheddleton, the chairman of Staffs4Europe which organised the coach, stood to express his thank to Hugh Hudson and Peter Coates for their generous sponsorship which had enabled two coaches, including ours, to take campaigners from Stoke on Trent and Staffordshire to the march. 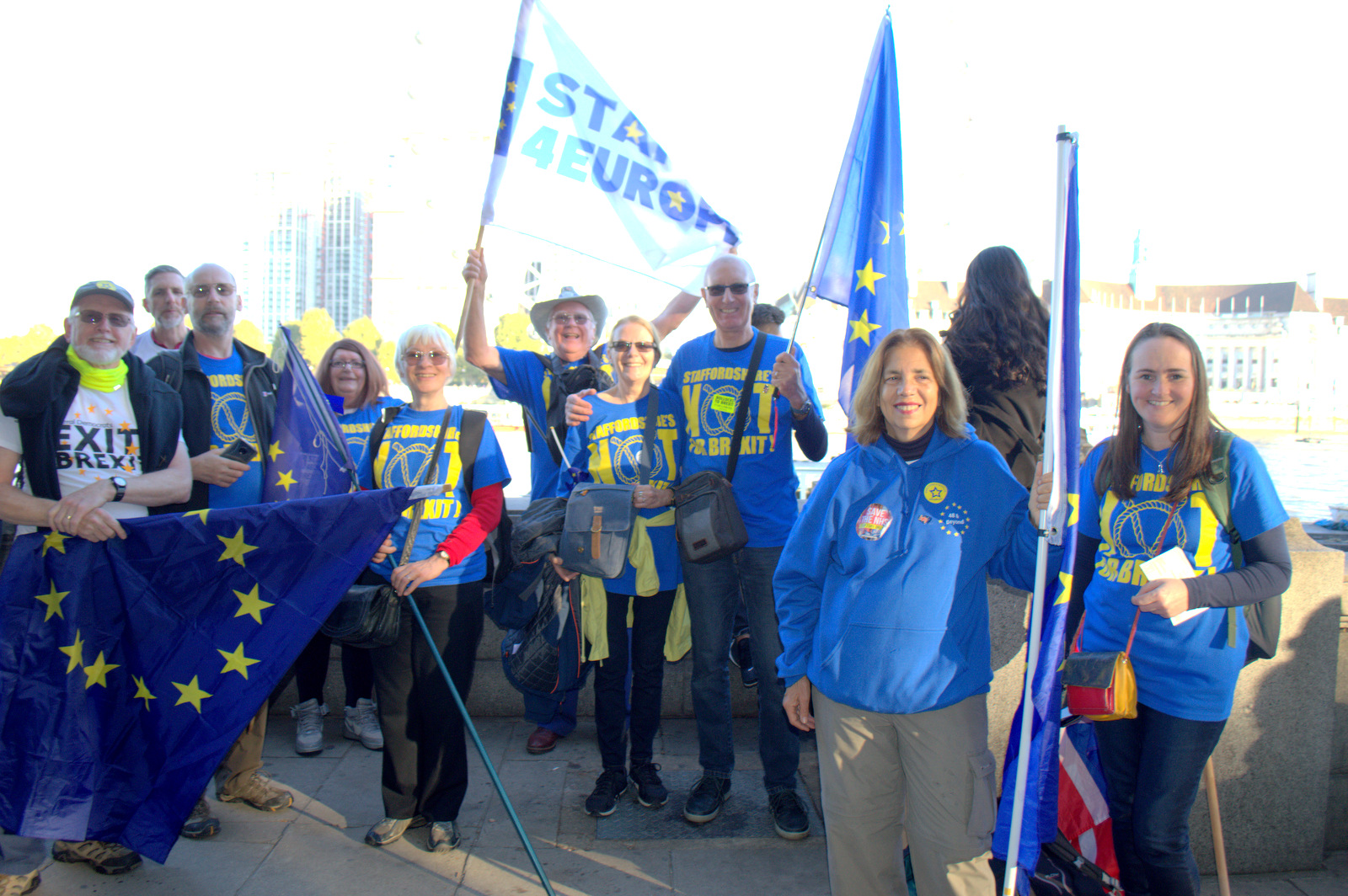 Although the group included a number of seasoned campaigners many were heading to their first campaign march, the Brexit mess created by the politicians having motivated them to take a stand. “Whatever your views on Brexit and the EU, the politicians have messed it up. The people need to take back control and decide when the facts are known. I hope we will Remain but if it’s a fair vote on the facts and people choose to Leave, then I’d go with that, but not this mess”, said one campaigner echoing the views of many.

Jamie Morrison, 9, from Leek, our youngest campaigner said “I’ve already started to learn Spanish and French. I don’t know what I want to do for a career yet but I don’t want my opportunity to travel and study in Europe to be affected by Brexit.”

His mum, Susannah, 51, a supporter of Scientists for EU and an NHS public health nurse she said she was attending the march because "My main interest is the NHS and I think it is at risk” and because she is concerned about important environmental protections saying “ I fear they will be trashed.” Susannah describes herself as “a British and European citizen” and wants “our children to have the same opportunities we had had to live, work and study in Europe”. She acknowledged “the sacrifices past generations made to secure peace across Europe, to develop laws which have greatly benefited the UK, and which are extremely important for our future security, prosperity and well-being as a nation.” 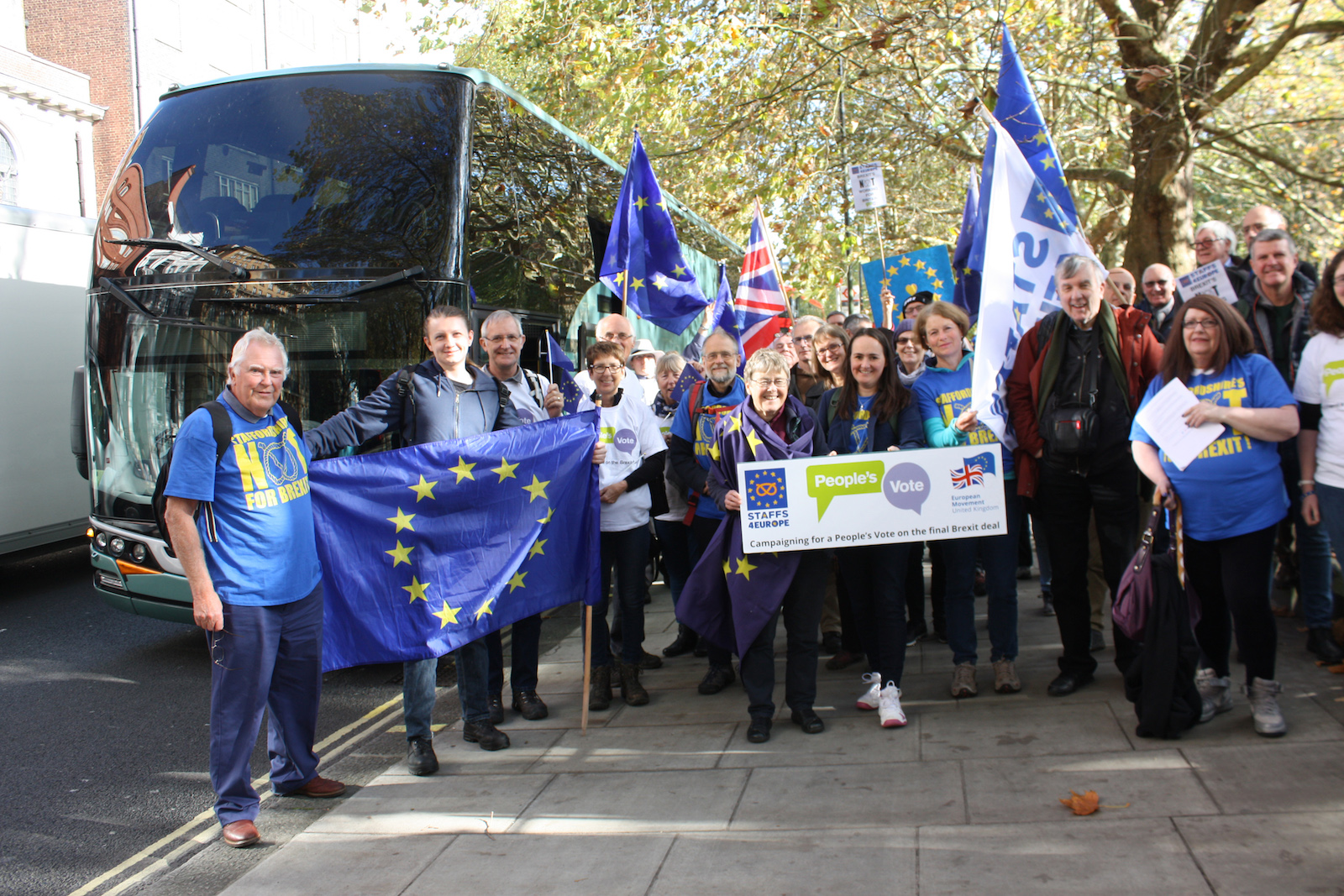 The group arrived in London to glorious sunshine. With one glance around it was clear that this was going to be big. After posing for a group photo, they headed off to join the march at Marble Arch. The route down Park Lane was already packed and the group was soon absorbed into the mass of people.

The atmosphere was friendly, conversations were struck with strangers: about their banners, where they had travelled from, why they were marching. Young, middle aged, old from every walk of life and every corner of the country. Our “Staffordshire’s Not for Brexit” T-shirts featuring the Staffordshire knot attracted much attention. “Staffordshire!” exclaimed one lady, “It’s good to see you here.” It was surprising how many people in the crowd had Staffordshire connections and were keen to introduce themselves. Some asked where they could get one of Staff4Europe's T-shirts and they sold all their spares but didn’t have enough to meet the demand. Who knew Staffordshire was so loved? The group is very proud!

The march moved slowly, by amazing chance they met up with fellow campaigners from Stafford who had travelled down by train but did not see our colleagues who had set off from Hanley on the other coach, hardly surprising in a crowd of over 700,000. They passed morris dancers, jazz musicians, people picnicking in the park and enjoyed the amusing banners. Some were cryptic such as “Ctrl-Z Brexit”, others amusing puns: “We’ll brie sorry if May delivers the Wurst Brexit. I wouldn’t put it Pasta!” while others gave advice: “Measure twice, cut once”. It was a serious business but the atmosphere was relaxed and friendly. Hardly a policeman in sight. Later, Andrew Neil, a well known Brexit supporter had said that this is what a mature democracy looks like.

By 3:30pm, the group had come to a halt in Trafalgar Square. Whitehall was packed and there was no chance of getting through to Parliament Square. Mike who was thoroughly enjoying the experience of his first march saw the bright side “It doesn’t matter we can’t get through, it’s more important that so many people made the effort to support the demand for a People’s Vote,” he said. 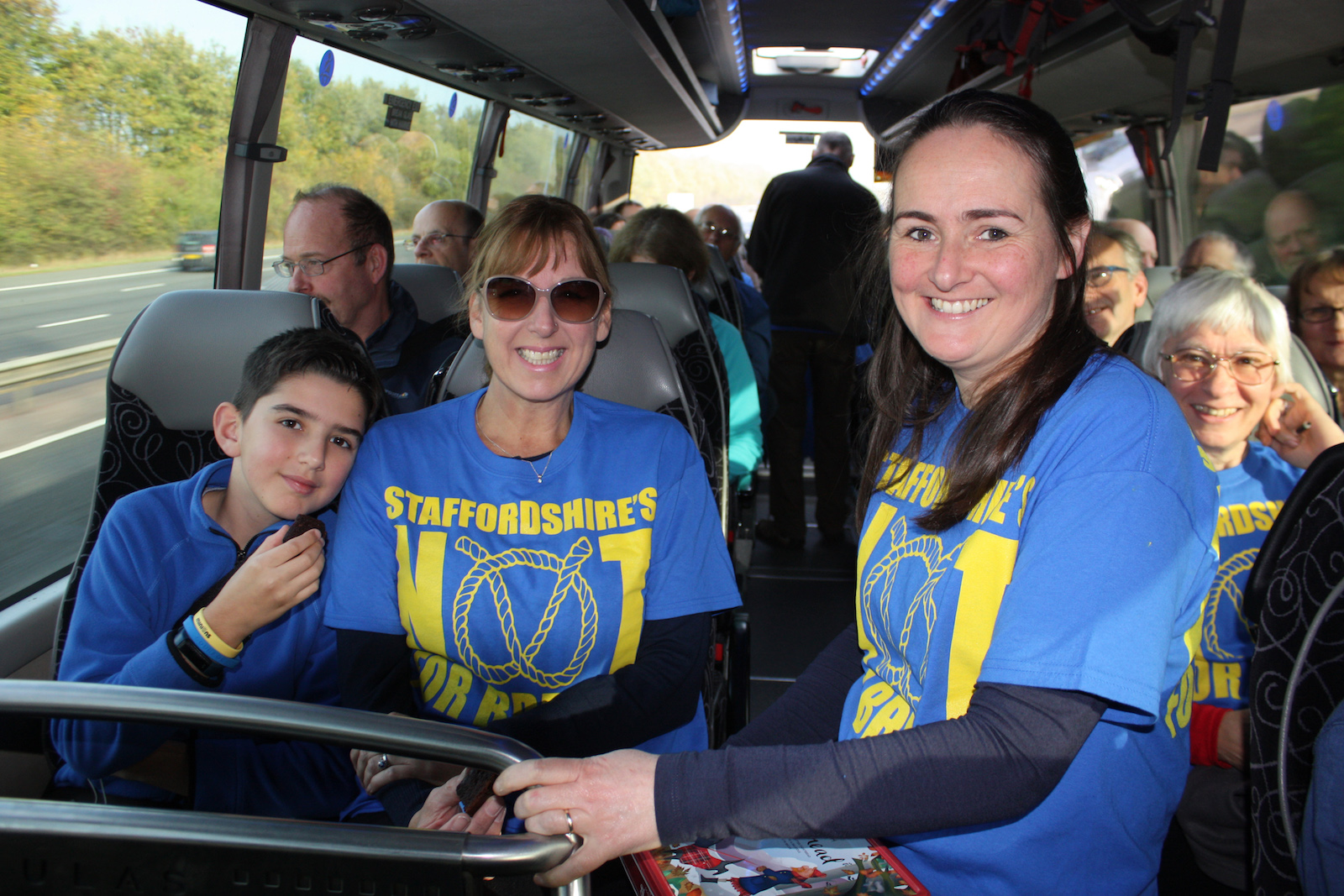 The rally ended at 4:00pm. The group posed for more group pictures while waiting to be picked up by the coach.

On the return journey the chatter was about how reaffirming the shared experience of the march had been mixed with sadness that Brexit was distracting the politicians from addressing the real and important issues affecting Staffordshire.

Mark Delf, 60, and Louise Adams, 58, who run a successful business from their Studios at Stockton Brook. Mark told us “For artists, Brexit is more than just the financial implications of leaving the world’s largest trading block. We are part of a wider community with shared values and ambitions, part of humanity without any regard for national borders or ethnicity. Indeed that is where we draw our inspiration. Some might say nothing will change. We don’t agree because we see the whole concept of Brexit as inwards looking.” 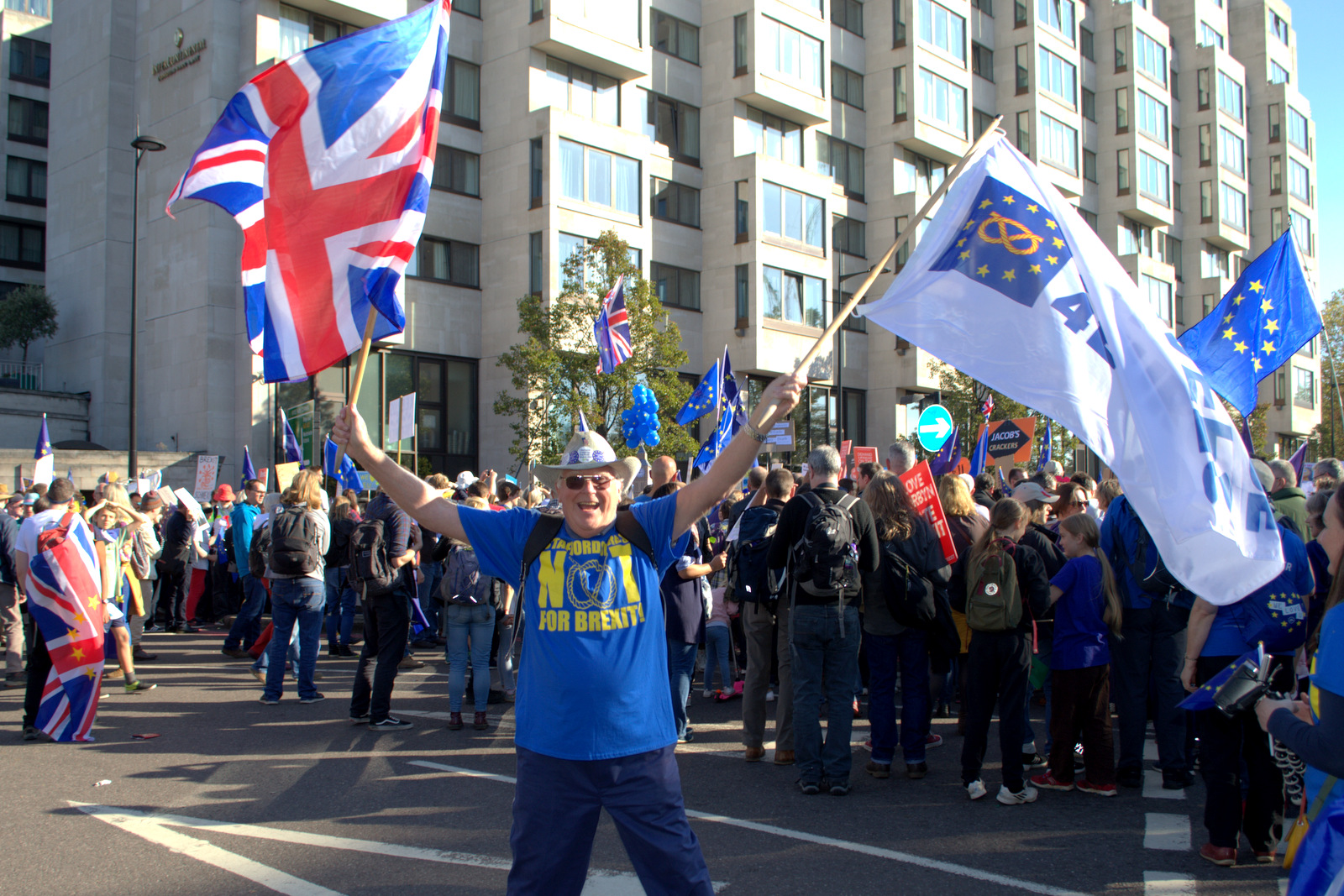 Mel North, 48, from Leek trains English as a foreign language teachers and works with lots of young people. She was one of the few in the group who made it through to parliament square in time to catch some of the speeches and she sums up the views of her fellow protestors when she says “It was fantastic weather and there was a wonderful atmosphere. What I found interesting was that this demonstration represented a cross section of the population. There were no vested interests or class divisions, we were all united in a single aim and that was to get this government to think again about Brexit. Either stop the withdrawal or at the very least allow the people to vote on the final deal, with an option to remain in the EU.”

As they neared the end of our long day out one supporter took a pragmatic approach: “If it does nothing else, the march has shown the rest of Europe that Britain is more than Brexit Leavers. We are all European citizens and we need to work together whatever the out come of this mad riddle.”