We have to win the argument with Leave voters who believe that the EU’s refusal to give the UK the sort of deal promised by Brexit campaigners is a punishment. London4Europe Committee member Michael Romberg writes

For such a widespread idea, it is quite hard to pin down what it means. It is easy enough to find the EU’s motivation to which it refers: the EU could not let the UK leave the EU and retain all the benefits of club membership without club obligations. Tick; that must be true – but is not of course punishment. Those who use the punish motif also refer to human emotions: annoyance at the affront to the EU’s self-esteem, say. Maybe; though it is hard to believe that would survive the reality of trade talks.

There really does not seem to be anything more underpinning the claim than annoyance that the EU will not let us have our cake and eat it; that the EU takes seriously the shared commitment to avoid a hard border in Ireland, supports member-state Ireland against soon-to-be-ex-member UK, and refuses to believe in non-existent technology; and that the EU seems to believe that Brexit means Brexit.

The backstop has proven particularly fertile ground for the punishment theory, especially the all-UK temporary customs union. That is odd. The all-UK coverage was something the EU did not want – they sought only to have Northern Ireland in the customs territory. The all-UK customs union was one of Theresa May’s rare negotiating successes – and as close as the EU came to allowing cherry-picking.

We as Remainers of course see Brexit as the UK punishing itself by negotiating a deal which is worse than the one we have.

The brutal logic of Barnier’s slide makes clear the consequences of the UK Government’s red lines: 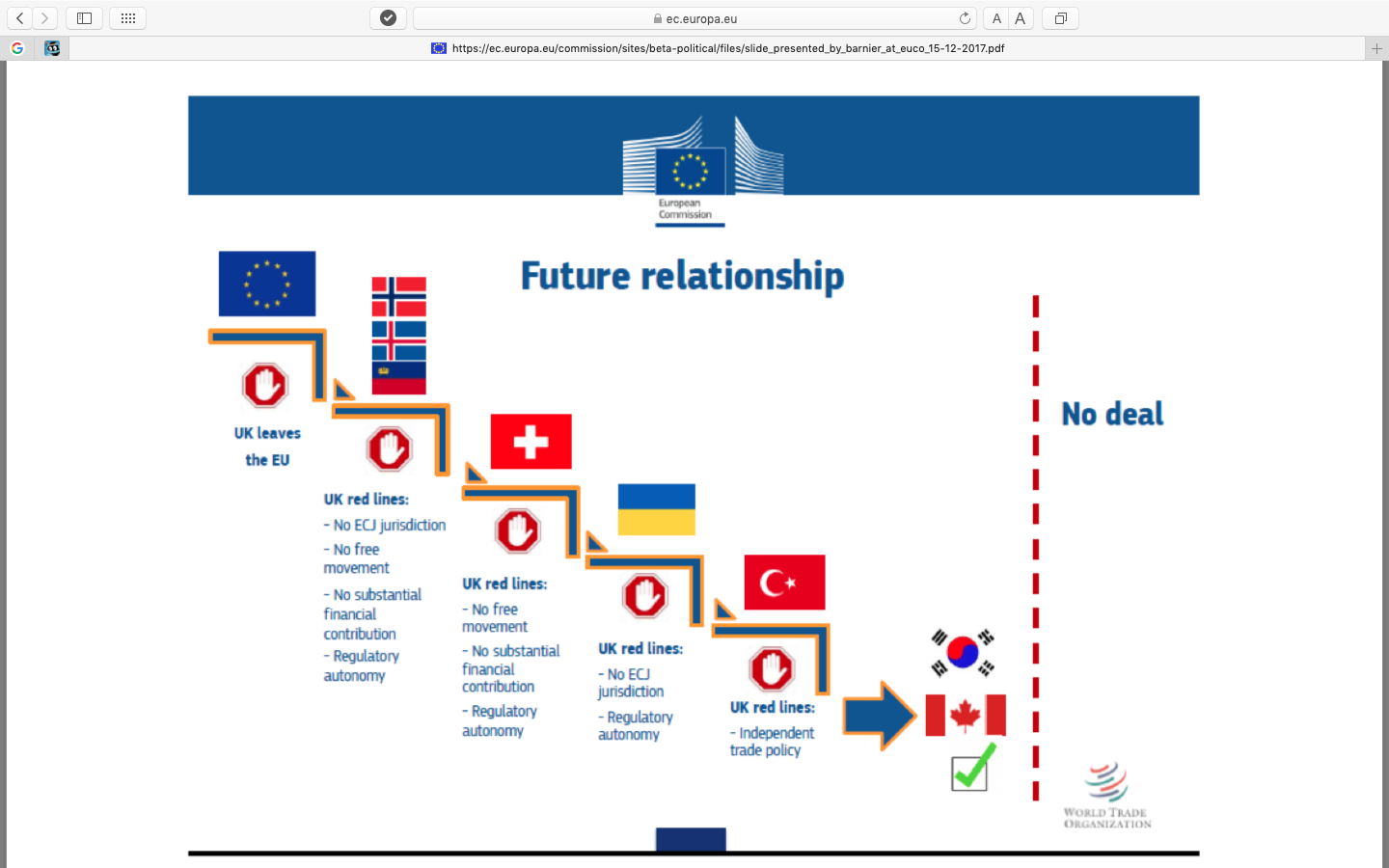 But Brexiters do not see it that way. Describing their viewpoint, Jonathan Lis puts it well: “Because we see ourselves as unique, the same treatment as any other third country is necessarily punishment”.

All we as campaigners can do is keep explaining: if you stop paying your magazine subscription the publisher is not punishing you when they stop sending you the magazine. That’s how it works when you leave a club: you lose membership privileges.

In January 2018, Chuka Umunna visited EU leaders and officials and reported: “Overall, the dominant sentiment is that far from seeking to punish the British people for voting to leave the EU, the EU27 see this whole Brexit process as “damage limitation”. They believe Brexit is bad for them and us.”

The BBC’s Europe Editor Katya Adler explained in June 2018 that whether the EU was punishing the UK was the question she was asked most often. No was her answer, the EU – like the UK – is looking after itself: “The EU wants a good Brexit deal. It believes it’s in its interest. The bottom line? It will never, ever, ever give the UK everything it wants in negotiations. Why? Because if it does it risks making leaving the EU seem very tempting.”

Jonathan Lis of think tank British Influence argued in Prospect (November 2018) that the myth of EU punishment lies in the psychology of Brexit: “The answer takes us to the heart of Brexit: namely, a co-dependent myth of domination and grievance. The EU must validate both our Anglocentrism and our victimhood, and thus simultaneously revere and attack us. Because we see ourselves as unique, the same treatment as any other third country is necessarily punishment.”

Professor Sara Hagemann looks in April 2019 at how the negotiations looked from the point of view of the EU: "The reality for EU governments is that Brexit represents a significant political and economic loss, at a time where they cannot afford vulnerability".

This post has been slightly edited and was originally published on the London4Europe website here.  Michael Romberg is a member of European Movement and a committee member for London4Europe.