Lord Michael Heseltine discusses how the time is right for political leadership on Brexit.

None of us have lived through a time of such political unpredictability in peacetime Britain. There are no precedents.

Indeed if a few months ago anyone had forecast events of the past few weeks they would have been greeted with incredulity. One thing, however, has not changed.

Our country is divided as never before.

The very concept of a United Kingdom is now threatened. Every family, every community, every political party argue, debate and fracture. People criticise Parliament for indecision. The stark fact is that Parliament is doing its job. It reflects what is happening across the country.

One thing, however, has changed.

A ruthlessness has been injected into the conduct of affairs. A Cabinet reshuffled to exclude debate.

Employees in Downing Street marched to the door under police escort having been sacked without any semblance of proper procedure. Parliament prorogued to stop it exercising its constitutional responsibilities to hold the government to account. Europe threatened with the calamity of no deal.

The Conservative Party mobilised to fight a bitter and divisive election. 21 members of the government sacked for behaving under his government as Boris Johnson and his colleagues behaved under Mrs May’s.

The pattern of events is not a jumble of historic coincidence. This pattern is deliberately planned and contrived to force a future on the British people for which there is no mandate. 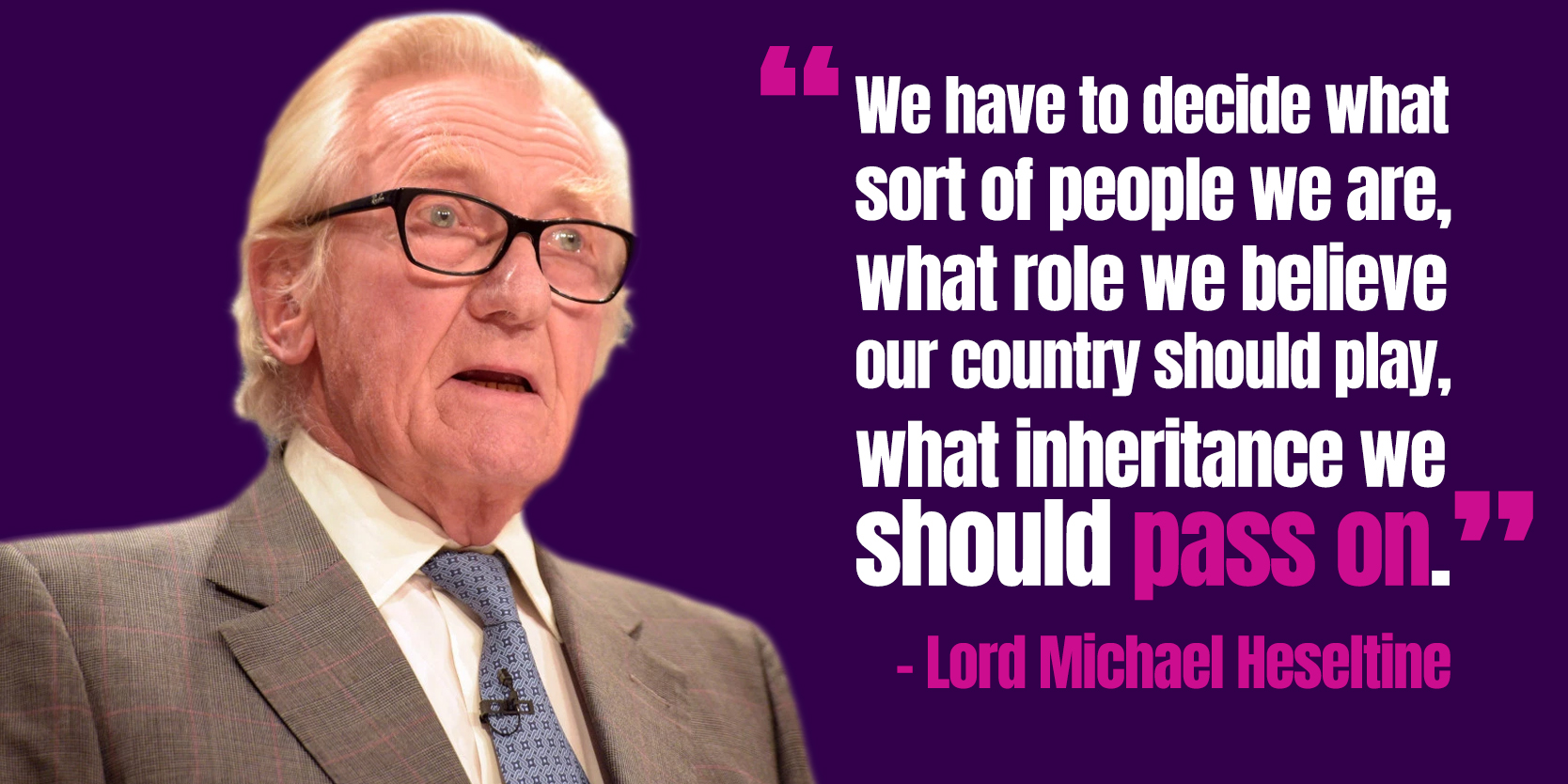 The responsibility lies without equivocation at the feet of Mr Johnson and the political zealots he has entrusted with the keys of No 10 Downing Street. Any observer with the faintest political interest could have seen the warnings.

In the end the debate about a place in Europe must transcend the day to day detail of everyday life. Of course, that is important, but in exercising a judgement about Europe we have to decide what sort of people we are, what role we believe our country should play, what inheritance we should pass on.

I lived through the Second World War.

I shared the aspirations of a new generation that it must never happen again.  As Churchill put it Jaw Jaw not War War. Three times in three quarters of a century Europe had been convulsed in bloodshed and conflict.

I shared the vision of every Conservative Prime Minister of modern times that our new destiny demanded our place at the heart of the emerging Europe.

The Reality of Europe

Let no one misunderstand the nature and reality of that Europe.

It is a coming together of 28 sovereign democracies who have agreed to share some sovereignty in order to add the essential ingredient of power to give meaning to that sovereignty.

It is Time for Leadership

If ever there was a need for political leadership in this country, that time is now.  Leadership that values the structure of cooperation and interdependence that emerged after the Second World War.

A structure that created for us a unique role in the three pillars of our world. Head of Commonwealth, a close friend of the United States of America and a leading member of the modern Europe.

We did not achieve this by divine intervention or by luck. It is the consequence of generation after generation of skilled and enlightened British statesmen and women who crafted for us a leading role on the world stage.

We must strive with all the resource at our command to prevent its destruction in one cataclysmic act of folly by a government oblivious to our past and indifferent to our future.

This blog was taken from Lord Michael Heseltine about Brexit at a Leeds for Europe Rally on September 7th 2019. You can read the full transcript of Lord Heseltine's speech here.