The European Movement UK is pleased to announce our affiliation with Veterans for Europe. Veterans for Europe is an active group of pro-European, pro-Remain veterans, serving personnel and dependents from all three services, whose aim is to support the United Kingdom in remaining within the European Union. 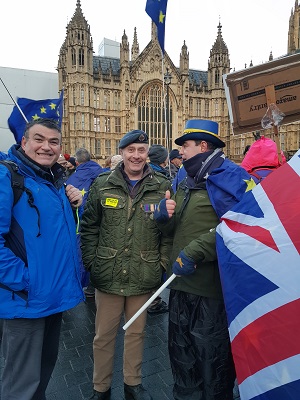 “We are very pleased that Veterans for Europe is joining the European Movement. People who have served in the armed forces have often seen many parts of the world, have worked with personnel from other countries and appreciate the value of the European project which has brought together countries that were previously at war with one another.

“We welcome people from all walks of life into the European Movement who want to support us in building a future side by side with our European partners and neighbours, believe that Brexit is not in the best interests of the UK and want the UK to have a place at the heart of Europe as part of the EU.  We look forward to Veterans for Europe contributing to our ongoing campaign and believe that they can bring a lot to our growing Movement.”

“We at Veterans for Europe aim to dispel the notion that the vast majority of veterans and serving personnel are pro-Leave, as it is simply not true. Many of our group have worked (and in some cases fought) alongside our European allies and believe that the best hope for peace in Europe is to remain in the European Union. With the support of the European Movement and in the true tradition of the British Armed Forces we will stand and fight for the good of our country and continent.”