Despite the restrictions caused by COVID-19, people across the UK have come together once again to say #No2NoDeal at the first virtual action day ever. Yesterday, the people sent a message to the government. They emphatically said NO to the worst-case scenario of a catastrophic No Deal.

From virtual meetings with MPs taking place in England, Scotland and Wales to a virtual rally there were loads of ways that people made their voices heard. People demanded that we achieve a good deal with our closest trading partners. 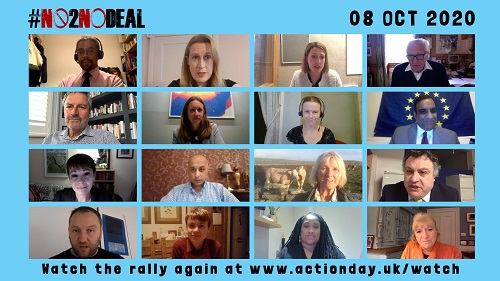 Top quotes from the Virtual Rally:

“If you look at the consequences that no deal would have, or even a bad deal would have on our economy - layer on top of that the problems that we're going to have in the worldwide economy with COVID and what the post-COVID recovery has to look like - the last thing we need is all that uncertainty. All that economic downturn, all the jobs that will be lost, all the growth that will be lost by going down the route of a no deal.”

“At a time of economic recession, mass redundancy and public health crisis, this is an incredibly self-destructive thing to do. It will leave my constituents in Streatham and people across the UK much worse off - with food prices already creeping higher and the government refusing point-blank to extend the transition period. A worst-case scenario no deal Brexit could see shortages of food, medicine and fuel, as well as increased costs for everyday goods. A Government that actually cared wouldn't risk this during an ongoing pandemic, a jobs crisis and the worst recession in history. Don't dig yourself out of a hole by digging even deeper.”

“Don’t give in, don’t give up. Use whatever peaceful vehicles are available. Tell your MP that it is their duty to our country to try and secure a rational steppingstone into the new post Brexit world, and that means avoiding by all account a No Deal Brexit”

“That “good outcome” means we're about to become the only major economy on earth with no trade deal with any of our neighbors within a 2000-mile radius. And yet in the middle of a deadly pandemic during the worst recession in 300 years, ours is a government that has refused to extend the transition.”

“I have a message for Prime Minister, Boris Johnson. Get a Deal. You promised you had one, deliver it, and avoid the chaos - say no to No Deal.”

“The Government's claims to be doing so to protect the Good Friday Agreement are risible, and represent a significant and deliberate distortion of what that agreement represents”

“A No Deal Brexit will have an impact on the import and export of medicines, and radioactive isotopes for cancer diagnosis and treatment. Let’s be honest: the middle of a pandemic is no time to disrupt our medical supply chains.

Vaughan Gething, Minister for Health at the Welsh Government:

“No Deal is not just unavoidable, it is not inevitable, it is a choice. The United Kingdom government could choose to take No Deal away and the additional threat that it would provide.”

“They said this was going to be the easiest deal on earth, and this is the chaos we got instead.”

Jenny Gilruth, Minister for Europe and International Government at the Scottish Government:

“Going ahead with Brexit at the end of this year whilst the economy is reeling from COVID is simply reckless.”

“A No Deal coinciding with Covid-19 would be catastrophic, and we must do all that we can to avoid it.”

Gavin Esler, Author and Chancellor of the University of Kent:

“Project fear is now Project here, it’s right now and it's with us. So, we are saying that No Deal, which no one ever voted for, no one was ever consulted about, is absolutely not acceptable.