The Hampshire European bus was parked by King Alfred statue in the historic city of Winchester. The driver was Polish, a good omen for the People's March on London. The bus trip organiser, Milan, was raised in the Czech Republic and is their best known European activist who has held information stalls in Winchester's High Street on regular Saturday mornings for 2 years. The fifty plus Winchester residents encompassed a complete age range of men and women from the city with the over eighties mingling with students from the University of Winchester.

The sun shone throughout the journey to the final destination opposite the Dorchester Hotel by Hyde Park. Ian, the Hampshire European movement chair, commented that anything less than 100,000 protesters on the march to Parliament Square might be reckoned a failure. By the time, they regrouped at 1:15 PM for the march, the roads leading to Marble Arch led them to believe 500,000 might be a realistic estimate of the actual numbers on parade. The group waited for an hour, many chatting with groups who had come from all over the country carrying banners which identified their geographical grouping or the cause which they most identified with – the NHS, teachers, local authority workers, students, the very young, and grandchildren who might, as they grow up, be deprived of the European connection in future years.

Some of the protesters had mass-produced colourful banners with familiar wording, others carried banners with coloured photographs of eminent Brexiters, all named. One banner, in particular, held by young woman swaying hypnotically to a nearby drumbeat caught my eye. She held out a photograph of Boris and David Cameron grinning at each other with the words 'Eton mess'. 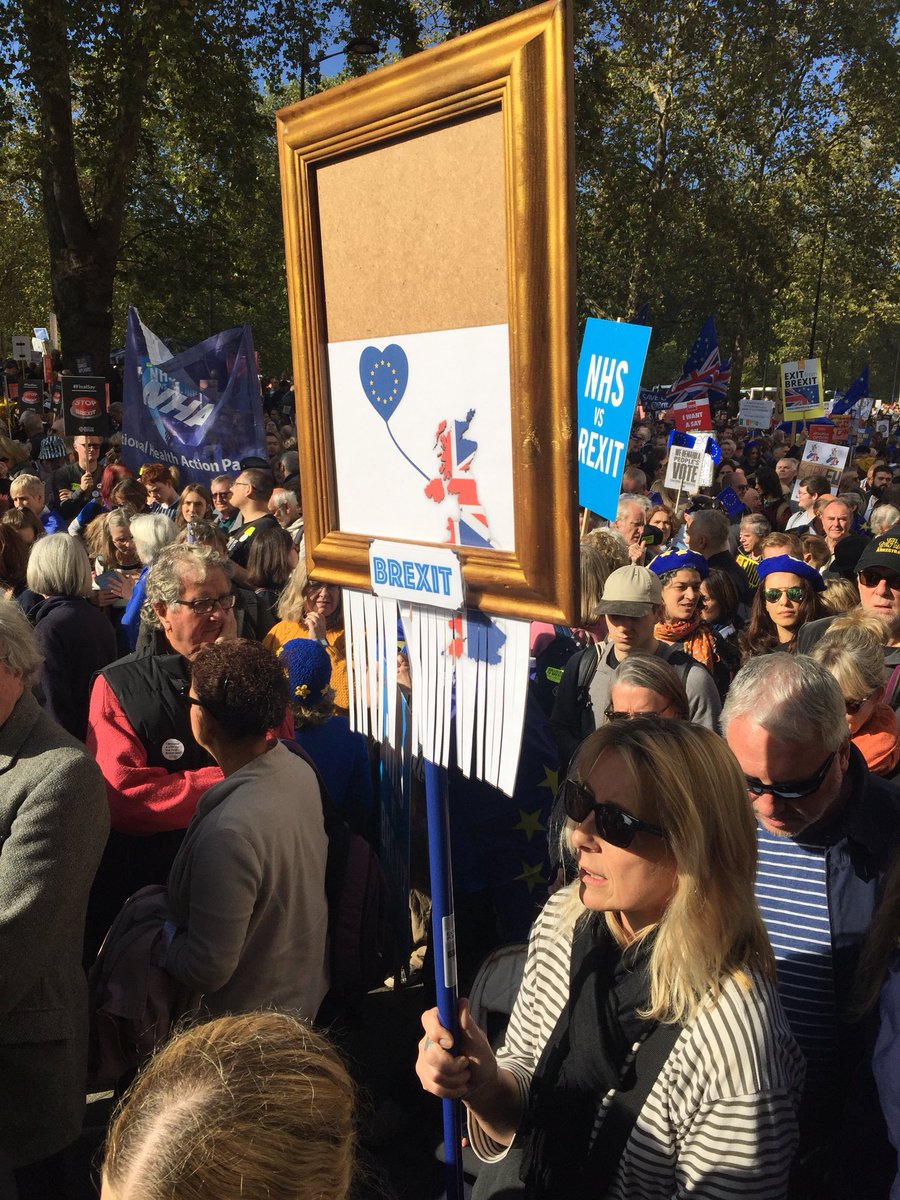 They slowly clambered over barriers, the young assisting the old, till by chance we were reunited with some of Milan's Winchester group. I took a photograph of a most original banner, a version of Banksy's shredded picture recently auctioned by Sotheby's: this time, the word Brexit was being shredded as it emerged from the picture frame.

Several lanes of slow-moving people in colourful array marched towards Piccadilly. By now 500,000 people seemed a modest figure. An attendance of 700,00– the largest civilian march on Parliament Square since the protest against the Iraq war. Two worked their way through the spectators and sidetracked the main movement through to Green Park and St James's Park where the protesters mingled with foreign tourists enjoying the autumnal lakeside perspective. A quick sandwich at St James's station and then they joined thousands at Parliament Square.

In front, a covered platform and a big-screen with the main speakers lined up to address the crowd. The Northern Irish voices of protest on the speaker platform reminded the crowd that the sectarian DUP, which holds Theresa May precariously in office, did not represent the people of Northern Ireland. They were followed by familiar faces: Caroline Lucas, Chuka Umunna, a Scottish SNP MP, Vince Cable and Anna Soubry. All spoke powerfully, none more so than Caroline Lucas who was passionately intelligent and supremely articulate. Soubry, reminded the audience that even if May manages to pull off a deal. It will always be second best to the current arrangement in Europe.

The group became aware of this point, that thousands of marchers were backed up along Whitehall to Trafalgar Square.

Parliament Square on October 20th was a symbol of a powerful mass movement of protest that would not go away. The square last year had been a scene of terror where citizens of the world as well as the UK were mown down by fanatics. The national and international response to these tragedies reminded us all that the blurring of national identities to safeguard our values and differences brings out the best of us. Staying in Europe and merging our collective identities to a common purpose is a lesson we should never forget.