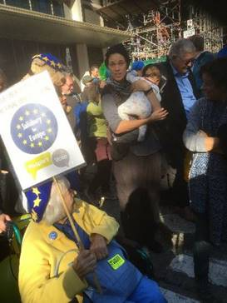 made their own way. They were young and old – from 90 years old down to childhood and everything in between.
The journey in went well, stopping to pick up additional people en route and practising chants. The group arrived and disembarked halfway down Park Lane with crowds beginning to gather. 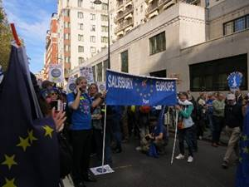 Two hours later at 1400, Salisbury for Europe were waiting to set off, and two hours later still, the group were only halfway down Piccadilly. Parliament Square ahead of them was already full and behind them people were still in Park Lane - both carriageways full.

Even though the purpose was so serious, it was a carnival atmosphere, good humoured and with a sea of flags and placards. The inventiveness and humour displayed in the placards was endless.
Do you like this post?
Tweet